The amount of Bitcoin being deposited into crypto exchanges by investors has reached a one-year high. This new trend was identified by the team at CryptoQuant through the following tweet.

The daily average amount of inflows for all exchanges hit a year-high.

Investors shifting from holding Bitcoin to sending their BTC to crypto exchanges is the result of Tesla’s CEO, Elon Musk, commenting that the company will no longer be accepting the digital asset for payments. Mr. Musk went on to explain that the reason behind the decision was that Bitcoin mining was costly to the environment and needed to be more energy efficient.

It Might Be Safer to Trade the Bitcoin Spot Markets

In a similar tweet, the CEO of CryptoQuant, Ki Young Ju, went on to caution derivatives traders that Bitcoin whales were depositing BTC to exchanges, thus possibly increasing selling pressure. Mr. Ju shared his analysis of Bitcoin through the following statement and accompanying chart.

If you’re a long-term $BTC investor, don’t worry. Your portfolio is the same as institutional investors in the States. If you’re a derivative trader, be careful in the short term. (Relatively speaking) whales are depositing $BTC to exchanges. 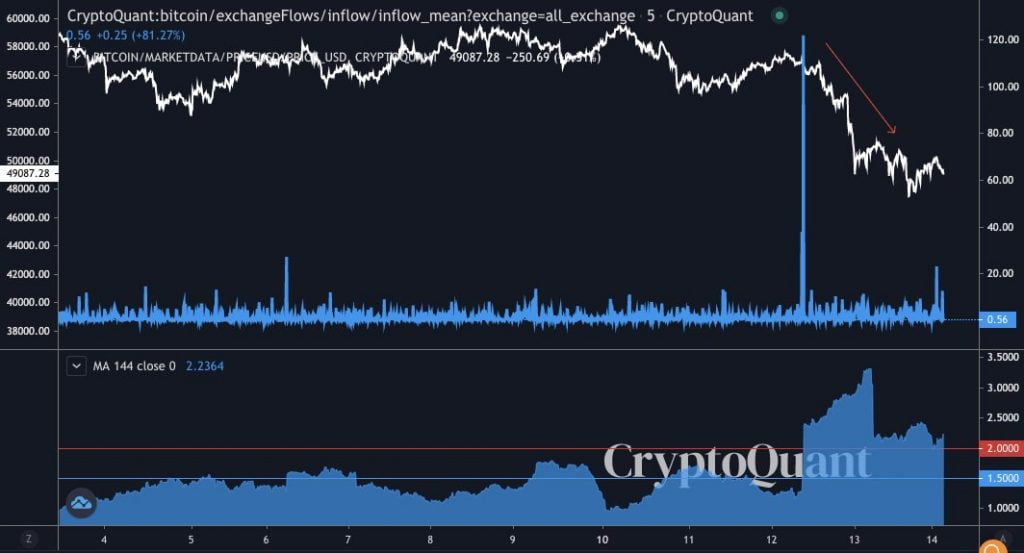 Some Bitcoin Whales are Accumulating

However, not all Bitcoin whales are selling as the team at CryptoQuant also identified 10,044 BTC leaving Coinbase yesterday, May 13th. The Bitcoin worth roughly $0.5 Billion, was purchased at an entry price of $49k. This purchase is an indicator that the $52k to $46k price zone is another possible area of accumulation by  Bitcoin whales who are optimistic of another leg up.