At the time of writing this, Bitcoin is hovering around the $9,500 price area after a quick dip to $8,900 around the weekly close on Sunday. Comparing the current value with that of the first day of Q2, it can be concluded that Bitcoin is still ahead in gains by approximately 50.7%.

In an earlier tweet, the team at Skew.com had done a similar analysis and concluded that Bitcoin will have a strong close to Q2 in 2020.

With two weeks left to go, it looks like #bitcoin will have once again a strong Q2 pic.twitter.com/9YvcpY9nY7

What Lies Ahead in Q3 for Bitcoin?

Doing a brief analysis of the Q3 column in the tweet by Skew.com, it can be observed that four out of the last six third quarters have not been profitable for Bitcoin. This loosely translates to a 66% chance that the third quarter of 2020 will be a rough one for Bitcoin in the form of a correction after halving.

This theory further echos a previous analysis of Bitcoin that had seen the potential of BTC dipping to as low as $8,000 or even $7,000.

A Brief Technical Analysis of Bitcoin 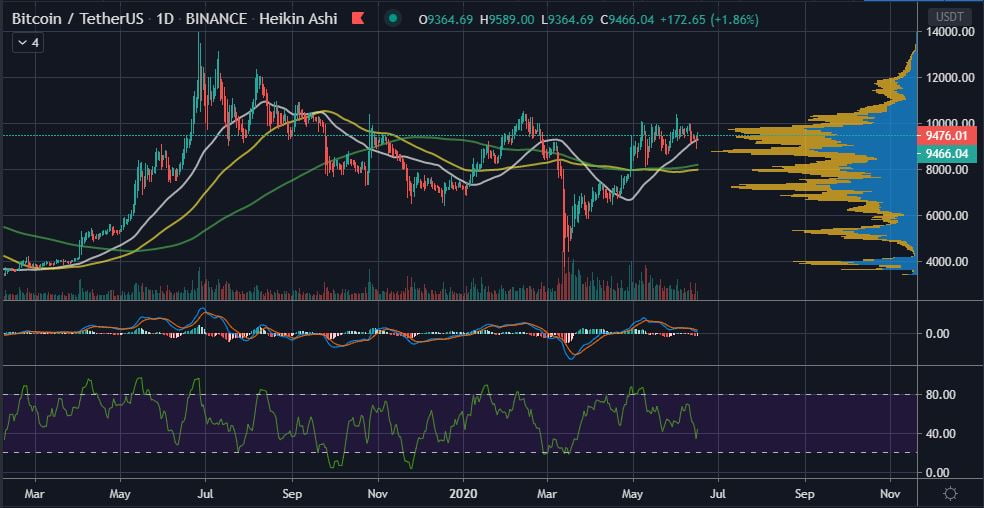 Checking the daily BTC/USDT chart once again, the following can be concluded.

In summary, Q2 of 2020 has approximately two weeks left and all signs indicate that Bitcoin will close off the first half of the year on a positive note. A brief technical analysis reveals that Bitcoin could either be gearing up for another push towards $10,000 with the momentum gained by its recent bounce at $8,900.

However, there is also a 50% chance that Bitcoin could be entering bear territory in the days ahead. Therefore, Bitcoin is in a no-trade zone for swing traders. On the other hand, scalpers can benefit from the current price movement of BTC.

As with all technical analyses of Bitcoin, traders and investors are advised to implement risk management techniques as well as stop losses to protect trading capital.