The CEO of Pantera Capital, Dan Morehead, has forecasted that Bitcoin (BTC) could hit a value of $200k in 2022.

His analysis is based on the adoption of Bitcoin on a global scale. He also explained that the price of Bitcoin increases by $200 with each addition of one million new users as explained in the following statement, and accompanying table demonstrating a $200k possibility by 2022.

For every million new users, the price of bitcoin rises $200.It happened every time except for February 2016, when the price was slow to hit.

The rise in the price has been amazingly constant.I’ll leave it to some future Avogadro to figure out exactly why.The important point is:If this relationship holds, bitcoin will hit $200,000 in 2022. 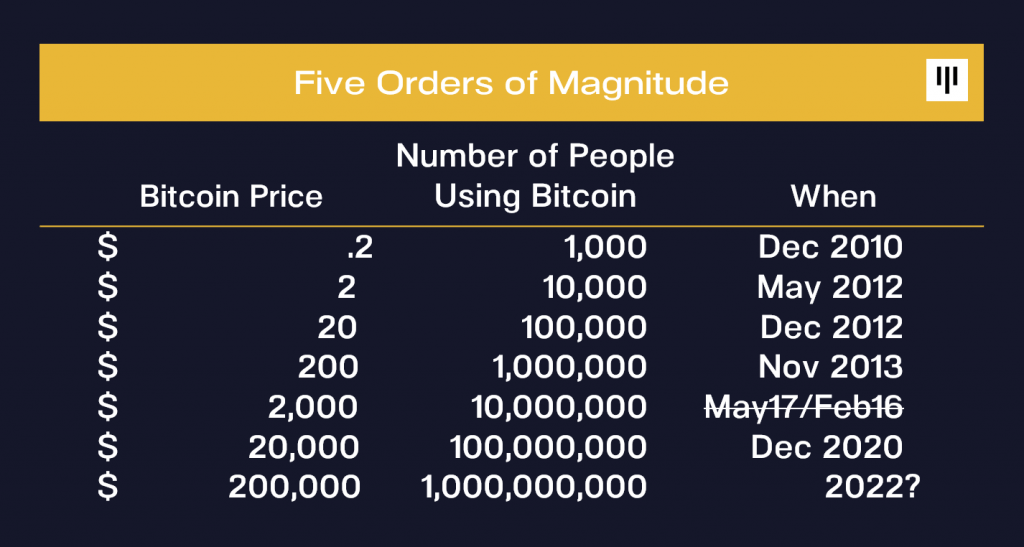 The analysis by Mr. Morehead and his team also pointed out that the key driver of Bitcoin adoption is smartphones. On a global level, roughly 3.5 billion people own one and it is ‘the only requirement to use Bitcoin’.

Additionally, the probability of Bitcoin hitting $200k by 2020 increases with the current demand of the digital asset by institutions after the Bitcoin halving. He explained this phenomenon as follows.

On the demand side, we’ve had massive companies like Morgan Stanley and PayPal enter the market.That shifts the demand curve much higher.

At the same time, the supply of newly-issued bitcoin was cut in half last May – as part of the every-four-years halving of bitcoin issuance.

In conclusion, his analysis pointed to a possible $700,000 terminal value of Bitcoin based on the $200 price increment per one million users.