Bitcoin Stored in Exchange Wallets At its Lowest Level in 2.5 Yrs

The amount of Bitcoin stored in crypto exchange wallets has been known to be decreasing since the Fed started printing fiat. Such actions by the Fed and other global central banks inspired individuals and institutional investors to hedge against inflation using BTC.

The bitcoin supply stored in exchange wallets is at its lowest level since almost 2.5 years. 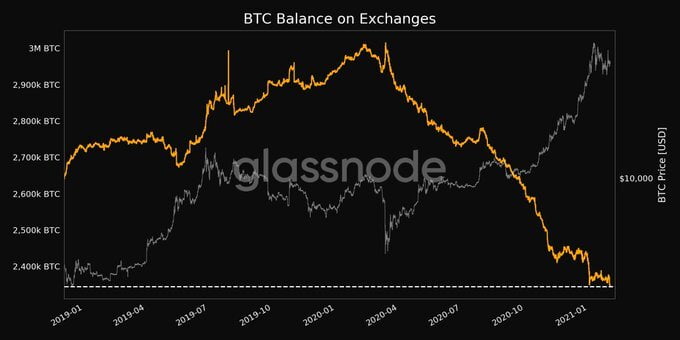 Microstrategy Buys another $10 Million in Bitcoin

As earlier mentioned, the amount of Bitcoin in crypto wallets is decreasing due to individual and institutional investors buying BTC to hedge against inflation. Furthermore, they are storing their Bitcoin offline.

One such example is MicroStrategy that has continually added Bitcoin to its treasuries. Earlier today, the team at MicroStrategy announced that they had purchased an additional 295 BTC for $10 million bringing their total holdings to 71,079 Bitcoins. The company’s CEO, Michael Saylor, further elaborated on the recent purchase as follows.

More Companies are Adding Bitcoin to their Treasuries

A quick glance at BitcoinTreasuries.org reveals that a total of 1,233,246 BTC is now owned by private and publicly listed companies. Grayscale’s holdings are at the top with 648,860 BTC under the company’s management.

To note is that Microstrategy’s CEO, Michael Saylor, is hosting a conference, tomorrow, February 3rd, to share the company’s Bitcoin playbook with other global CEOs and companies willing to listen. Chances are, that after the conference, more Bitcoin will be scooped up from exchanges by new companies who are will to add Bitcoin to their treasuries.