Bitcoin’s Market Cap is Bigger than JPMorgan, Facebook and Tesla

Bitcoin is getting harder and harder to ignore. This is according to an analysis done by the team at Ecoinmetrics that pointed out that Bitcoin’s market cap has exceeded that of VISA, JPMorgan, Facebook and Tesla on an individual basis.

Additionally, Bitcoin’s market cap is 59% of Amazon’s; 43% of Apple’s; 35% of the gold in the financial system; and 8% of the physical gold market.

The team at Ecoinmetrics shared their observation via Twitter and through the following infographic comparing Bitcoin’s rising market cap, alongside major companies and gold. 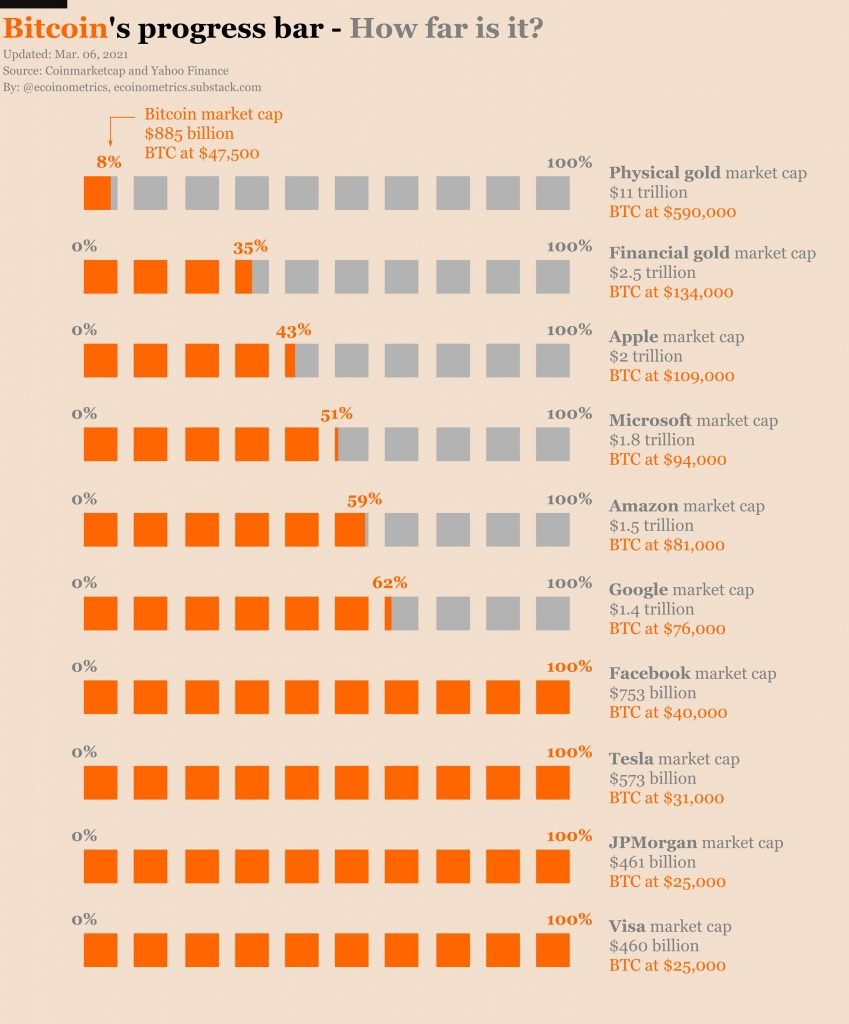 The US Government is in Debt, Buy Bitcoin – ‘Rich dad, Poor Dad’ Author

As Bitcoin continues to make headlines, the author of ‘Rich Dad, Poor Dad’, Robert Kiyosaki, has once again urged retail investors to buy Bitcoin, Gold and Silver as a hedge against the ongoing money printing habits of the US Federal Reserve.

According to Mr. Kiyosaki, the US Government is broke yet the stock market keeps going higher hinting that a collapse of some sort is in the pipeline. His analysis of the current financial times can be found below.

US bankrupt yet stock market higher.

Inflation is Coming, Bitcoin Will Save You – Tyler Winklevoss

Mr. Kiyosaki’s comments on the state of the US economy echos Tyler Winklevoss’s warning that the US economy is at the cusp of inflation and Bitcoin is the best hedge against it. Mr. Winklevoss was commenting on a CNN article that quoted Federal Reserve Chairman Jerome Powell, predicting an increment in consumer prices this summer.

Below is Mr. Winklevoss’s tweet alongside the quoted article.

Daddy says inflation is coming. #Bitcoin is will save you. Few understand this. https://t.co/DzVGPwDkkR