No Result
View All Result

No Result
View All Result

by Nick Chong
in XRP News

XRP Readies to Rally Against Bitcoin

According to a recent analysis by Michaël van de Poppe, a contributor to CoinTelegraph and a trader at the Amsterdam Stock Exchange, XRP’s pair against Bitcoin is printing some rather strong signs: the below two-day chart has seen the pair remain above “vital support,” which has provided support and resistance for over four years and is “a level to watch closely.” The analyst added that the price has “broken out of a massive falling wedge construction and marked bullish divergences alongside it, which is often seen as a sign of a trend reversal.”

It isn’t only Michael who is observing bullish signs. Per previous reports from Ethereum World News, trader CryptoKaleo, who earlier this year was touting a price fractal analysis that was eerily accurate for days on end, noted that the XRP/BTC pair is on the verge of seeing a strong breakout. More specifically, a downtrend resistance line that has suppressed the pair for nearly two years is about to break to the upside.

These assertions come as Bitcoin Jack, a former analyst at cryptocurrency analysis and markets research group Bravado, has noted that altcoins are starting to show some much-needed strength. He noted that the altcoin market capitalization to BTC pair could see some rapid growth should some technical analysis scenarios play out in full.

He backed this call by looking to the fact that the aforementioned pair (ALTS/BTC) is in a compressional phase and about to break out of a bearish segment of the one-day Ichimoku Cloud as the Cloud has flipped bullish into the future, which is a “signal of strength” according to the analyst.

Bears Have Upper Hand, at Least on USD Chart

Unfortunately, it seems that bears have the upper hand on the XRP/USD chart.

According to popular trader TraderSZ, XRP’s performance against the U.S. dollar isn’t looking too hot. In fact, the cryptocurrency has slipped under $0.23 again after showing some strength earlier this week. He thus remarked that as long as XRP remains under the mid-range level of $0.266, he would be inclined to suggest that a move to $0.135 — some 40-45% lower than current prices — will pan out over the coming weeks and months. 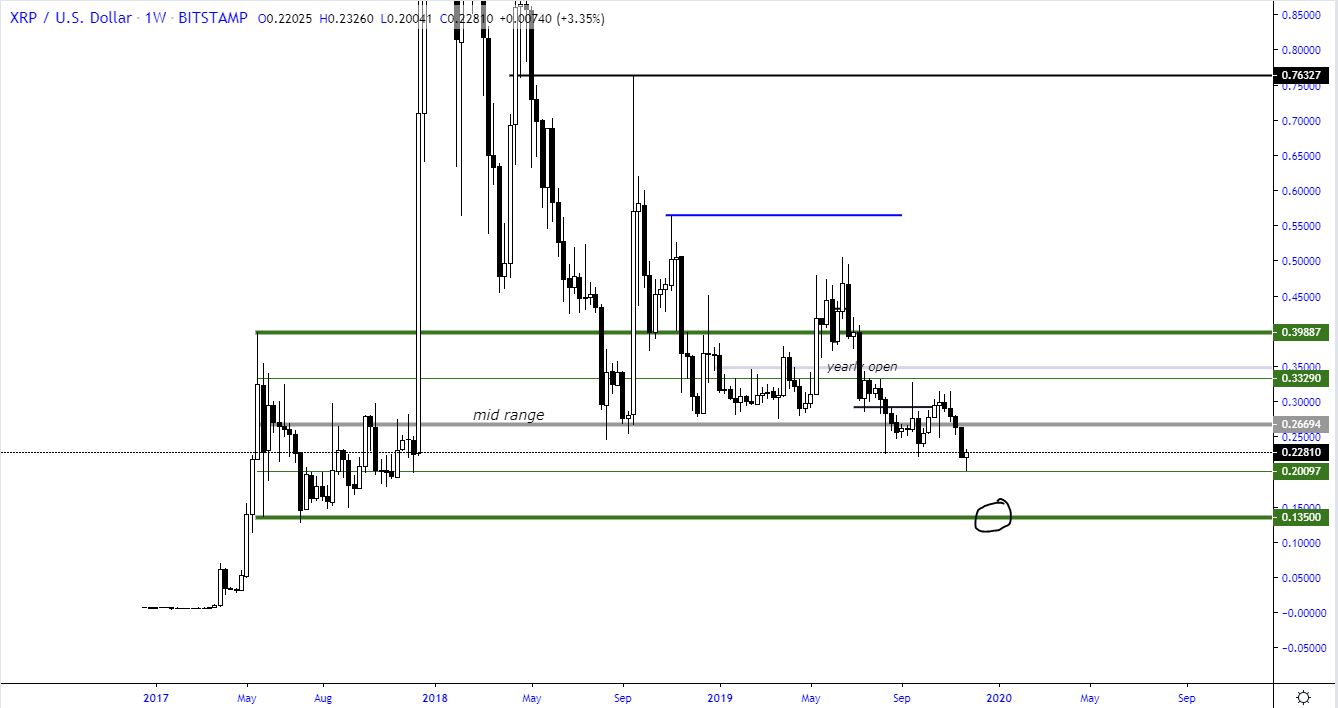 Since 2013, Nick has shown interest in Bitcoin and cryptocurrencies. He has since become involved in the industry as a full-time content creator, working for NewsBTC, Bitcoinist, LongHash, among other outlets. Aside from covering the news, Nick is a Creative at Taiwanese technology company HTC.

XRP May Explode 170% Higher Against Bitcoin: Analyst Explains Why

tip (at) ethereumworldnews.com
No Result
View All Result