Despite signs of exhaustion on the daily chart, Ethereum investors still have ETH2.0 to look forward to.

The month of June is now in its second week and Ethereum’s price is in a zone of consolidation between $218 and $250. On the 2nd of June, ETH managed to push past the earlier identified resistance level of $250 and it briefly looked like the area was going to be turned into a support zone. However, as soon as ETH/USD traded at $253, the King of Crypto – Bitcoin – fell hard from around $10,200 to $8,600 on BitMex and $9,300 on Binance. This quick move by BTC affected Ethereum which dropped from $253 to $218.

From a technical analysis point of view, the journey up for Ethereum as seen through the ETH/USD daily chart. By looking at the Daily MACD and MFI, it can be concluded that Ethereum is due for a retracement that would see it retest its strong support zone of around $228. Trade volume is also decreasing further pointing to a possible dip down. 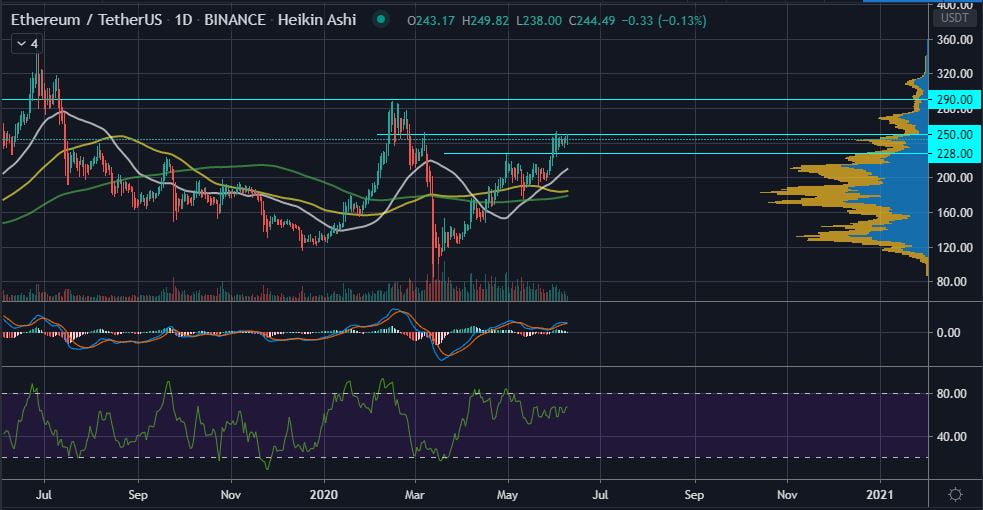 Also to note (from the Tradinview chart above) is that Ethereum’s current price at $243 is above the 50-day, 100-day, and 200-day moving averages. This further pleads the case that there is a hint of bullishness lurking for the coin whose blockchain is due for a network upgrade in Q3 of 2020.

With the upgrade expected in late July, one scenario is that ETH will once again attempt and succeed at breaking the $250 resistance level and propel itself to the next known major resistance zone of $290. Failure to which, would be a drop back to $228 and possibly lower levels once the ETH2.0 upgrade is complete.

However, investors and traders are very much aware that the minimum threshold for staking is 32 ETH and many have been accumulating the coin in anticipation of earning the rewards that come with PoS. Such accumulation means that the price of Ethereum will continue to rise as demand for ETH increases.

The team at Arcane Research estimates that approximately 120,000 Etheruem addresses have accumulated 32 ETH in anticipation of staking. This is a 13% increment in the last year. Below is a tweet by the team providing a graphical representation of the growth.

👀Another sneak peek into our weekly market report👀
Are investors getting ready for Ethereum staking? Data from @nansen_ai shows that almost 120,000 @ethereum wallets are ready for staking. This number has grown by 13% over the past year.
Read more here: https://t.co/UKFQKI2jze pic.twitter.com/G3nXhylels

The chart from Arcane Research provides some proof that on a macro level, the price of Ethereum will continue to benefit from the continual demand as a result of accumulation geared towards staking.

As with all technical analyses, traders and investors are advised to exercise risk management and implement stop losses to safeguard their trading capital.