The month of July has been an eventful one for the ChainLink (LINK) digital asset. LINK opened the month at a value of $4.65 which was a few cents shy of LINK’s previous all-time high value of $4.96. Since then, ChainLink has continued to provide gains for investors reaching a new all-time high of $8.92 – Binance rate – on the 15th of July. This is an increment of 91.8% in a two week period. 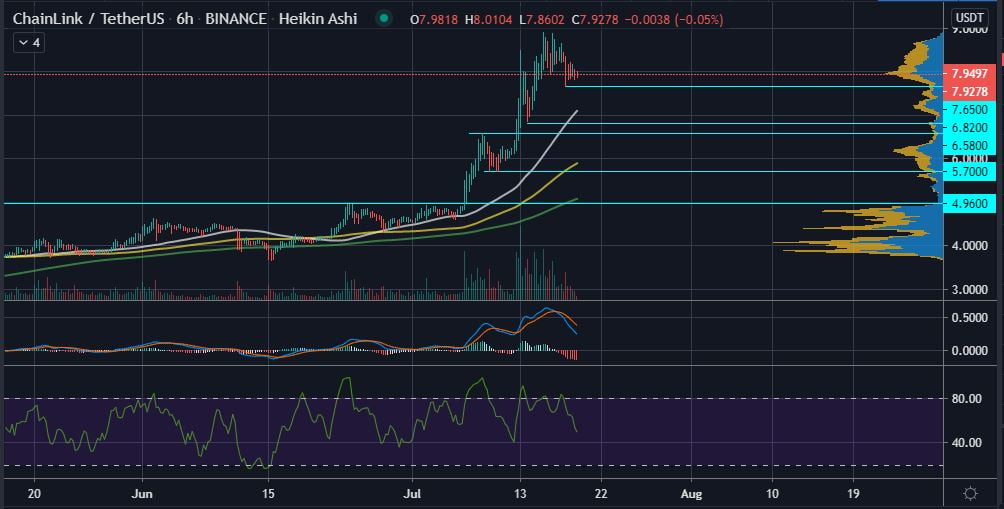 From the 6-hour LINK/USDT chart, the following can be observed.

Effects of the Report by Zeus Capital on LINK’s Bullishness

Two days ago, a report was published by Zeus Capital that labeled the ChainLink project as vaporware. However, the document has since been pulled off the web further providing fuel to the theory that it was published with malicious intent.

With LINK in the midst of a natural pull-back, there is no evidence that the report has had the desired effect on the digital asset.

One theory circulating on crypto twitter is that authors of the 60-page report probably placed short orders on LINK and leaked the report in an attempt to capitalize on the selling that would soon follow. The theory implicates another crypto project as orchestrating the authorship of the FUD loaded report.

I'm usually not retweeting drama but there are strong signs that @NEXO #NEXO is behind the Fake Chainlink Zeus FUD Paper and that they were the ones shorting LINK before that and I think that should shared. If it's true, that would be absolutely ridiculous #Chainlink #LINK $LINK https://t.co/yf4oqphPFK