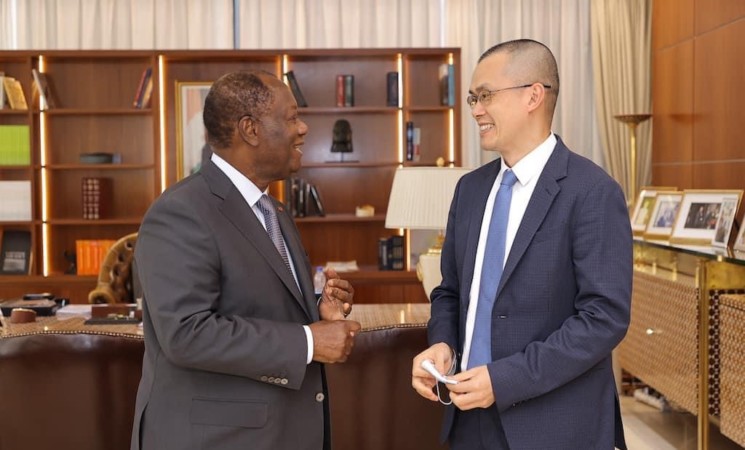 Binance CEO Changpeng Zhao visited The Republic of Côte d’Ivoire to discuss the burgeoning world of cryptocurrencies as part of a global mission to incentivize broader crypto adoption and blockchain integration.

During the visit on Tuesday, Zhao met with the country’s leader and Head of State, President HE Mr. Alassane OUATTARA. The pair supposedly spoke about cryptocurrencies and possibly adopting blockchain technology on a national scale.

Other key government officials including the Minister of Economy and Finance, Mr. Adama COULIBALY, and the Deputy Secretary-General of the Presidency of the Republic, Mrs. Masséré TOURE- KONE were present for the meeting.

Shortly after, CZ tweets his thoughts on crypto adoption in Africa and how he believes that blockchain has a major role to play in the continent.

Indeed, Binance has established a presence in Africa and is available in countries like Nigeria. The exchange also sponsored the AFCON tournament which was held earlier in 2022.

In 2022 so far, Zhao has visited several jurisdictions and met with top government officials to talk about cryptocurrencies. The Binance chief recently had meetings with El Salvador’s Nayib Bukele and the Crown Prince of Bahrain as well.

CZ said the meetings have been about driving crypto forward and paving the way for widespread adoption, and regulatory oversight where needed.