Bitcoin (BTC) becomes a $1 Trillion asset at a value of $53,680. This fact was shared by the team at Documenting Bitcoin via the following tweet.

At the time of writing, Bitcoin is trading at $48,715 with its current market cap of $904.494 Billion. Additionally, Bitcoin’s fully diluted market cap (if all BTC were minded and in circulation) currently stands at $1.019 Trillion as seen in the screenshot below courtesy of Coinmarketcap.

Bitcoin Could Test $50k this Month

With respect to price, Bitcoin has printed an ascending triangle with an upper boundary at $49k as seen in the 6-hour BTC/USDT chart below. 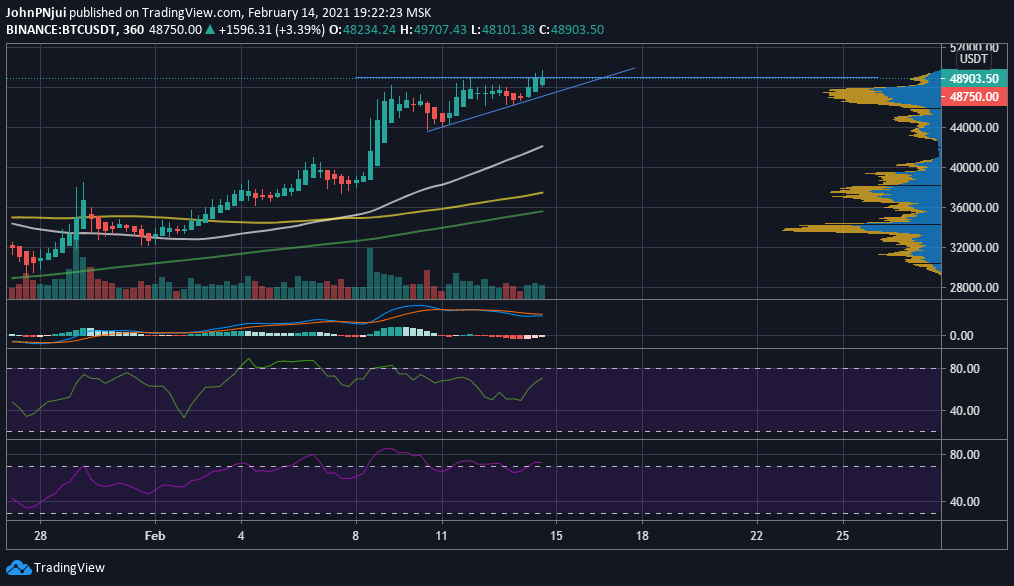 Also from the chart, it can be observed that Bitcoin’s 6-hour MACD is in the process of attempting to cross in a bullish manner above the baseline. The 6-hour trade volume is also in the green with the MFI yet to hit overbought territory at a value of 70. However, the 6-hour RSI is hinting at an overbought scenario in the short term.

In the case of moving averages, Bitcoin has deviated quite a bit from the 50 MA (white). Such a deviation implies that Bitcoin will at some time in the near future, fall back to this moving average and perhaps find some support from it.

Summing up the brief technical analysis, Bitcoin is very much in bullish territory that could result in a new all-time high at, or above, the $50k price ceiling. However, the weekly close is only hours away. Chances are, that Bitcoin could experience a brief period of selling pressure before the new week, thus postponing its journey to new highs.

In an earlier analysis, Timothy Peterson of Cane Island Alternative Advisors pointed out that $60k might be Bitcoin’s local top for the current parabolic move. Mr. Perterson’s analysis and $60k value is derived from his Metcalfe model as demonstrated in the two tweets below.

I now have 2 indicators suggesting #bitcoin 60k is the top. One is price to metcalfe value 2017 level (shown). The other is based on historical behavior of 200MA which I posted earlier here: https://t.co/RTzetWoxOJ pic.twitter.com/gNxBtHnjt5