Bitcoin (BTC) has been bombarded by the second day of shocking news with President Trump testing positive for the Coronavirus. President Trump made public his diagnosis earlier today via Twitter and explained that First Lady Melania Trump also tested positive for COVID19 and both were under quarantine in the White House.

Below is the tweet by President Trump notifying the world of his COVID19 positive test.

Tonight, @FLOTUS and I tested positive for COVID-19. We will begin our quarantine and recovery process immediately. We will get through this TOGETHER!

The news of President Trump testing positive for the Coronavirus comes less than 24 hours after Bitmex and its owners were charged by the CFTC and the US Department of Justice for operating an illegal derivatives exchange and violating the Bank Secrecy Act.

When news broke of President Trump testing positive for the Coronavirus, Bitcoin had just managed to recover to the $10,600 price level. Bitcoin then dropped to $10,371 – Binance rate – after the world was notified of President Trump’s diagnosis.

As far as reactions go, Bitcoin has managed both news events rather well having dropped a total of approximately $600 to its recent low of $10,371. Furthermore, the King of Crypto has since regained its footing above the $10,400 support area at its current price of $10,542 – Binance rate.

In terms of support, Bitcoin’s 100-day moving average is providing some level of confidence at least in the short term. This can be seen in the chart below. 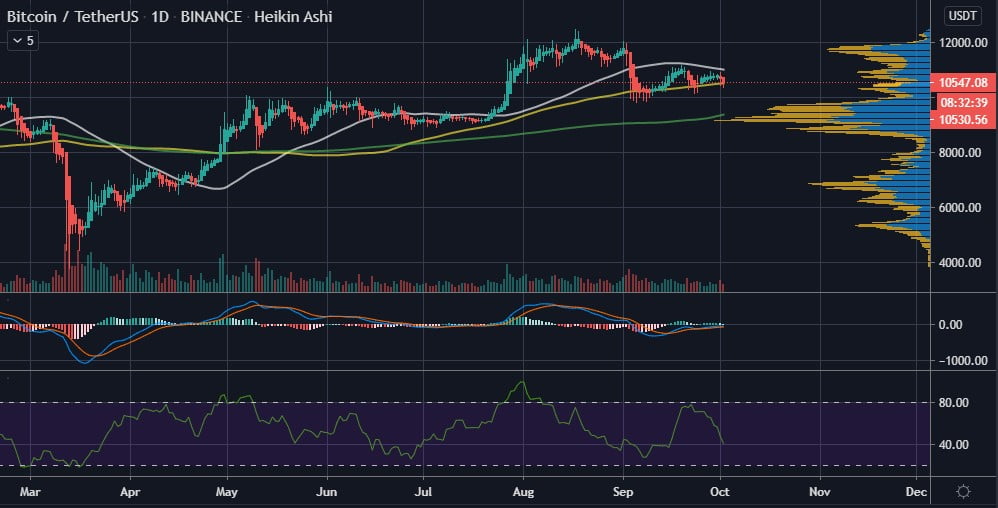 Best to Be Cautious With Bitcoin

In conclusion, and keeping in mind that Bitcoin is highly correlated to the S&P 500, it might be wise to watch the crypto markets from afar for the next one or two days. Conversely, those who are comfortable with shorting the Bitcoin and altcoins in the crypto markets can do so keeping in mind that Bitcoin might attempt to reclaim the $10,600 price area at least in the short term.