Bitcoin Might Reclaim $19k Despite BTC Miners Selling their Bags

Bitcoin is once again in uncertain territory after bouncing to $18,700 levels from the local low of $17,600 set only yesterday. At the time of writing, Bitcoin is trading at $18,200 and could be in the midst of printing a double bottom that could catapult the King of Crypto to familiar territory above $19k.

Bitcoin Miners are Selling their BTC

The current bearish Bitcoin environment can be attributed to BTC miners selling their bags at these levels. According to on-chain data from the team at CryptoQuant, the Bitcoin Miners Position Index (MPI) has hit a three-year high. This in turn means that Bitcoin miners are most likely selling their BTC on exchanges or OTC markets. The team at CryptoQuant shared this information via the following tweet and accompanying chart demonstrating the increased MPI.

It seems miners are selling $BTC to the OTC market or exchanges.

For the better part of Q3 and Q4 of 2020, every Bitcoin dip has been bought up rather quickly. In a recent commentary regarding Bitcoin’s current market action, the team at Weiss Ratings predicted that Bitcoin will eventually break the $20k price ceiling as demand for the asset is quickly ‘eating up’ the supply of BTC being sold. The team further explained their hypothesis as follows.

Last Tuesday, #BTC hit $19,845.98, a 52-week high, according to Coinmarketcap. There’s a lot of supply at these levels and it’s only a matter of time before demand starts to eat some of that up. That’s when we’ll see the move past $20,000 and beyond. 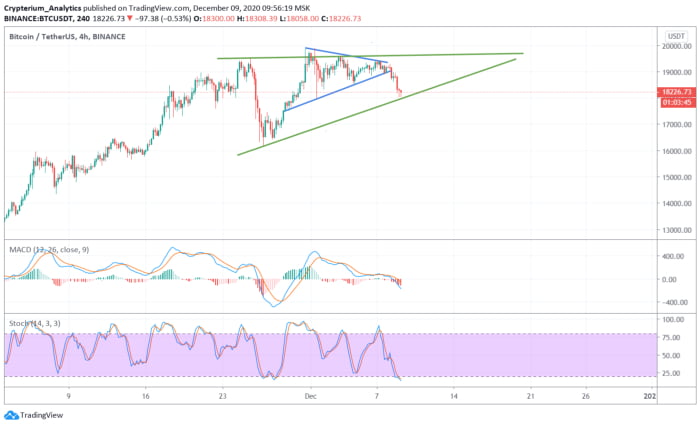 The chart came out of the symmetrical triangle downwards, but this does not mean a trend change. The current low is still much higher than the previous one, which was on November 27th. In addition, the price is in a global ascending triangle and is now forming a third wave….

Most likely, the price will reach the upper limit in the $19,500 — $20,000 range. This may happen before the end of this week. Depending on whether the price breaks through the historical maximum, we will be able to judge the further trend of Bitcoin.