Bitcoin’s $30k – $32k Level Should Hold due to Institutional Investors

The CEO of CryptoQuant, Ki Young Ju, has shared his analysis that points to Bitcoin finding solid support around the $30k – $32k price area. According to Mr. Ju, this price area should hold as it is where most institutional investors made their purchases of Bitcoin.

He points out that a lot of Bitcoin left Coinbase on the 2nd of January when BTC was around the aforementioned price area. Therefore, it is likely the Bitcoin purchases on this date were made by the said institutional investors who will defend this price area.

Mr. Ju’s shared his analysis via the following statement and accompanying chart demonstrating the outflow of Bitcoin from Coinbase on the 2nd of January.

There are many institutional investors who bought $BTC at the 30-32k level. The Coinbase outflow on Jan 2nd was a three-year high. Speculative guess, but if these guys are behind this bull-run, they’ll protect the 30k level. Even if we have a dip, it wouldn’t go down below 28k. 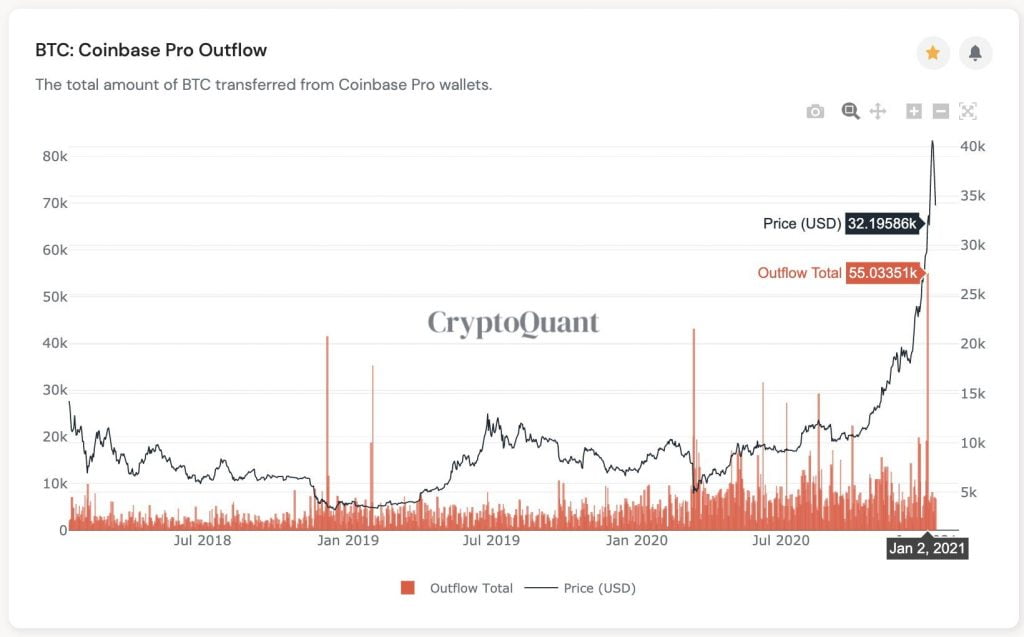 Coinbase Going Down Accelerated the Drop from $41k

With respect to the recent price crash by Bitcoin, veteran Bitcoin and Crypto analyst, Willy Woo, has postulated that the dip was most likely accelerated by Coinbase experiencing technical difficulties. According to Mr. Woo, Coinbase was not registering buys when the dump was occurring. This then caused the value of Bitcoin to drop by $350 on the platform thus affecting the Bitcoin index that futures platforms use.

His exact explanation was as follows.

Spot market sell-off started around $38k, then Coinbase partially failed, not registering buys, causing its price to go $350 lower than others, this pulled down the index price that futures exchanges use to calculate leverage funding, wrecking bearish havoc on speculative markets.

Unlike previous crashes in the past 2 years, where over-leveraged markets lead by trader liquidation, this one started on spot markets, then was greatly amplified by a single exchange partially failing, yet did not turn itself off for the good of the ecosystem.