DeGods DAO Buys a Basketball Team in the Big3 League Founded by Ice Cube, the Proud Owner of DeGods NFT #3177

Big 3 is a League Founded by Ice Cube, Who is Also the Proud Owner of DeGods #3177

The Big 3 is a 3-on-3 basketball league founded in January 2017 by actor and music legend Ice Cube and entertainment executive Jeff Kwatinetz. The two pioneers in their respective industries had a vision of a half-court, player-centric basketball league focused on entertainment and innovation. The league introduced ‘the 4-point shot, with three 4-point circles beyond the 3-point line.

To note is that the team at DeGods is yet to make an official announcement or provide information on what the purchase of the Killer 3s basketball team entails. However, in a follow-up Tweet, the DeGods team explained that they plan to offer tickets, merchandise, and part-ownership of Killer 3s using the DUST token.

We plan to offer tickets, merchandise, and part-ownership in $DUST (and a lot more).

We will empower our community to use the IP to build independent revenue streams.

We’ll be doing a Twitter Spaces with @icecube & @JeffKwatinetz

tomorrow at 3PM PST to share all the details.

In an earlier interview today, the founder of DeGods, Frank DeGods, explained that this was ‘probably the most fascinating experiment in the entire NFT space right now.’ He also added that millions of people now have a chance at owning a basketball team, thus making their dreams come true.

Frank DeGod also shared the vision of owning a basketball team via Discord, as seen through the following screenshot. 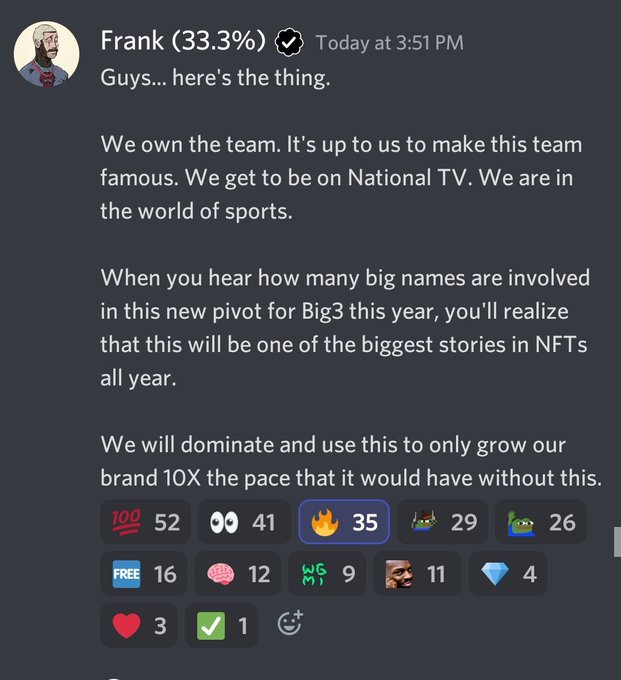