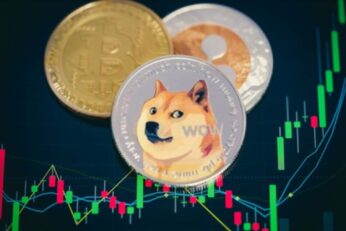 Per a recent Bloomberg report, Musk’s Twitter acquisition will reportedly end this Friday, which could play an elemental role in boosting Dogecoin’s popularity across the board.

Why Is Dogecoin Up And Trending?

Per a recent Bloomberg report, Musk reportedly held a video conference call with his bankers to help close the Twitter acquisition deal by Friday this week. The report further adds how the banks involved with the acquisition are putting together “the final credit agreement and are in process of signing the documentation,” in their bid to expedite the entire acquisition process.

This isn’t the first time the price of Doge has shot up in relation to developments linked with Tesla’s CEO Elon Musk. Musk is known to be a staunch Doge proponent and has praised Dogecoin multiple times on various public platforms.

Musk once referred to Doge “as people’s crypto” back in 2021.

“Lots of people I talked to on the production lines at Tesla or building rockets at SpaceX own Doge. They aren’t financial experts or Silicon Valley technologists. That’s why I decided to support Doge – it felt like the people’s crypto.” Musk later shared

Amicably referred to as “Dogefather” by the internet, Musk later went ahead to hail Dogecoin adding how Doge’s transactional value is better than that of Bitcoin’s.

“The transaction value of Bitcoin is low and the cost per transaction is high. At least at a space level, it is suitable as a store of value. But fundamentally, Bitcoin is not a good substitute for transactional currency,” adding that even though Dogecoin was created as a silly joke, it is better suited for transactions.  “The total transaction flow that you do with Dogecoin is transactions per day has much higher potential than Bitcoin.” Musk later shared

Furthermore, with the Twitter-Musk deal finally concluding, speculations are rife whether Dogecoin will be integrated into Twitter as a potential payment method. Back in April, Musk had suggested that he may soon introduce Dogecoin payments with Twitter Blue, however a final confirmation is yet to be announced.