The high network activity on the Ethereum blockchain is also evident in the total number of unique addresses to date.

According to EtherScan.io, the Ethereum network currently hosts over 148.8 million unique user addresses as illustrated through the following chart. From the chart, it can also be concluded that the growth and use of the Ethereum network has been steady since the blockchain was launched in mid-2015.

High Network Activity Points to a Bullish Future for Ethereum

The continuous network activity on Ethereum is one reason to remain bullish on the value of ETH. This is despite Ethereum gas fees constantly increasing due to the activities on the network causes congestion. However, the implementation of the London upgrade will include EIP-1559 that is meant to ease the issue of gas costs.

At the time of writing, an exact date has not been provided for the London upgrade but core Ethereum developer, Tim Beiko, gave a July estimate through the following roadmap via Twitter. 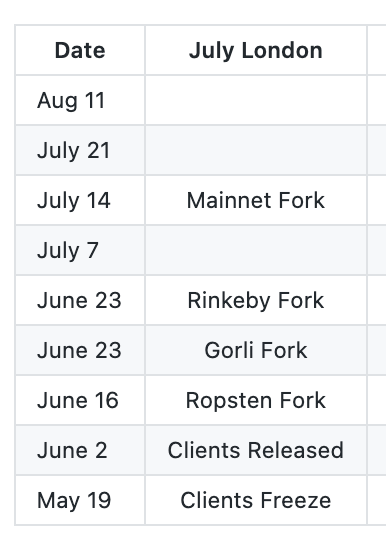 Chances are, that the excitement and hype surrounding the implementation of EIP1559, will provide bullish momentum for Ethereum to confidently break past the $2,500 price ceiling and possibly to $3k. The possibility of an Ethereum bullish environment due to the upgrade was explored by the team at Market Meditations who had this to say.

Yesterday’s highs [of $2,644] can likely be attributed to a coming upgrade that is expected to reduce the supply of Ether, which could help boost the price. Known as EIP 1559, the change solves a current problem…

After bitcoin finds a steady floor, Ethereum having shown strength, is primed to extend to $3000.