The Co-Founder and CEO of Bitmex, Arthur Hayes, is for the idea that Ethereum (ETH) could soon visit the $500 price area in the near future. Mr. Hayes made the comments via Twitter and as Ethereum (ETH) attempted to break the $400 price ceiling.

Ethereum Recovers from the Fast & Furious Dip to $325

Mr. Hayes’ comments were before Ethereum suffered the gut-wrenching drop from $415 to $325 that caught many crypto traders off-guard. Ethereum has since regained its bullish momentum and is once again flirting with the $390 – $400 price zone.

A quick glance at the daily ETH/USDT reveals that the digital asset is once again in bullish territory as shall be elaborated with the help of the daily chart. 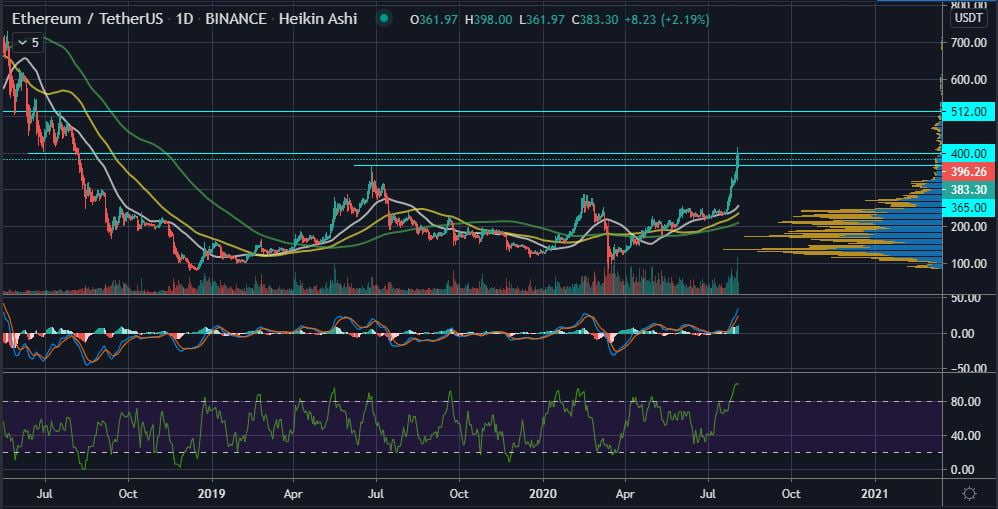 From the ETH/USDT chart, the following observations can be made.

Summing it up, Bitmex Co-Founder and CEO, Arthur Hayes, has put forth one scenario of Ethereum continuing on its upward trajectory and testing the $500 price level. A quick glance at the daily ETH/USDT chart reveals that Ethereum is still in bullish territory despite its recent dip to $325.

Furthermore, a clean break above $400 could set in motion the trajectory needed for Ethereum to fulfill Mr. Hayes’ prediction.

Additionally, Ethereum’s momentum in the crypto markets is as a result of the popularity of DeFi and the anticipation of the ETH2.0 upgrade. Proof of high DeFi activity can be seen in a recent Coinbase report that explained how its team handled ETH network congestion on August 1st.

As with all analyses of Ethereum, traders and investors are advised to use adequate stop losses to protect trading capital.