The CME Group will launch their highly anticipated Ethereum futures contract tomorrow, February 8th, with early trading being available later today, Sunday, February 7th. The launch of the CME Ethereum futures has been the force behind ETH’s rally from around the $600 price level in December 2020, to the recent all-time high of $1,759 – Binance rate.

The current all-time high by Ethereum was as a result of ETH breaking past the previous all-time high of $1,480 and the associated resistance zone between $1,400 and $1,500. This area is now a support zone and will once again be an area to watch as the CME Ethereum futures go live. This crucial support has been highlighted in the daily ETH/USDT chart below. 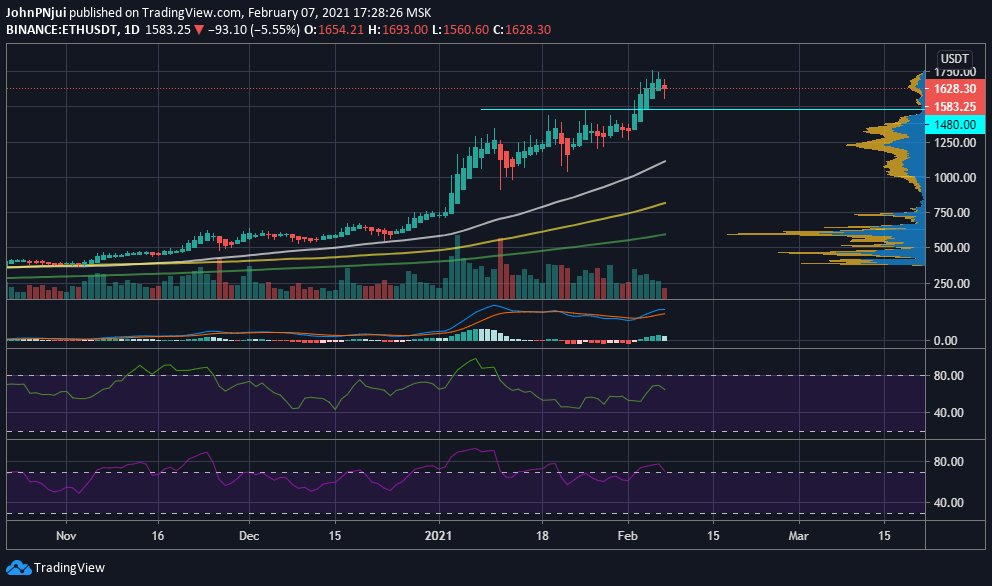 The daily Ethereum chart is also hinting at a bearish short-term future for ETH as shall be explained.

To begin with, the daily trade volume is in the red with the red Heiken Ashi candle confirming this. The histograms of the daily MACD are also short indicating reduced buying by ETH bulls. Secondly, the daily MFI and RSI at a value of 64 and 69 respectively, are hinting at an ongoing correction by Ethereum.

Veteran Bitcoin and Ethereum traders are very much aware that the launch of the CME BTC futures on December 18th, 2017, was responsible for the impressive rally to $20k. The launch of the Bitcoin futures that year would go on to usher in a brutal bear cycle that would end one year later with BTC at $3,150.

Therefore, there is a slight chance that Ethereum could suffer a similar fate once the CME ETH Futures go live.

Institutions Such as Grayscale are Scooping Up Ethereum

However, the converse might be true and the derivatives from the CME Group will provide access of Ethereum to institutional investors who are busy scooping up Ethereum at a record rate. One such example is Grayscale Investments that has added 104,990 ETH to its bags in the last week alone. This fact has been highlighted by the team at Bloqport via the following tweet.