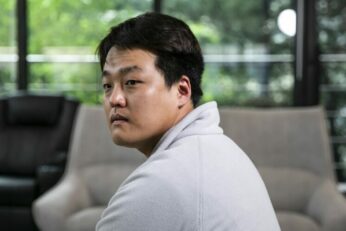 Terra Founder Do Kwon Might Be On A Run: Report

South Korean prosecutors are not able to track the location of the Terraform Labs founder Do Kwon after an arrest warrant was issued against him concerning the Luna crypto crash of May 2022.

Kwon was earlier presumed to have been living in Singapore till now however a recent statement issued by Singapore Police confirms that the Terraform Labs founder is not in the city-state, sparking a global debate about his recent whereabouts.

Do Kwon Is Nowhere To Be Found

South Korean prosecutors are having a hard time tracking Do Kwon’s recent whereabouts. The Terra founder was earlier presumed to have been living in Singapore but a statement issued by Singapore Police states that Kwon is currently not in the city-state.

Per a Bloomberg report, the prosecutors have now raised a potential prospect signaling that the Terraform Labs founder may be “evading the ongoing probes” issued against him indicating that Do Kwon is allegedly on a run.

Per the report, a possibility of “circumstantial evidence of escape” has been looming over Do Kwon ever since he left for Singapore to settle his base. However, Do Kwon took to Twitter to issue multiple clarifications and denied being on the run. Kwon further stated that he is ready to cooperate with multiple jurisdictions, and is looking forward to clarifying the truth over the next few months.

In another follow-up tweet, Do Kwon cheekily noted that people who are his friends and peers are allowed to know his real location and not others. The Terraform Labs founder further addressed the growing scrutiny over his location and whereabouts by referring to it as an invasion of his privacy.

The Luna crypto founder has been on the radar of South Korean judicial authorities ever since May 2022 when the world witnessed one of the most intense crypto crashes of all time. The Luna crash followed by its stablecoin UST de-pegging from its dollar peg had wiped nearly $42 billion worth of investors’ funds out of the crypto market. The crash had brought Do Kwon into the spotlight with several allegations mounting on him. Do Kwon is currently suspected to have committed fraud against the investors and is being investigated for the same.

The Seoul District Court had earlier issued a warrant against him, followed by initiating a process of suspending his passport. Kwon was earlier assumed to have been living in Singapore, but the recent developments confirm that the Terra founder is not in Singapore, sparking heated discussions on his current location.