Bitcoin (BTC) has done it! The King of Crypto has set a new all-time high value of $20,794 – Binance rate. With this move, Bitcoin has achieved what looked like an impossibility due to the Coronavirus crash of mid-March that saw its value drop to as low as $3,700.

Bitcoin’s Weekly Close, Was a Strong One Above $19k

The path above $20k had been foreshadowed by a strong weekly close of approximately $19,100 this past Sunday. Such a weekly close was the highest in Bitcoin’s and savvy Bitcoin traders and investors were optimistic that the all-time high would be broken before the end of 2020.

At the time of writing, Bitcoin is trading at $20,700 in what looks like a second attempt at breaking its new all-time high value.

According to a recent report by the team at Crypterium analytics, Bitcoin might keep pushing up towards the $21k to $22k price area before a correction. The team shared their analysis via the following statement, and before Bitcoin broke its all-time high.

It is difficult to say what will happen next…Time is playing against Bitcoin now. The longer it fails to set new highs and breakthrough $20,000, the more likely it is to enter a downtrend. Personally, we think that it won’t be long for this. The only question is at what level it will happen: from $19,500 or from $21,000 — $22,000.

From a technical analysis point of view, Bitcoin has entered uncharted territory with only the previous all-time high of $20k being a familiar reference. By breaking this value, Bitcoin has now turned it into a considerable support zone which will determine its fate moving forward. 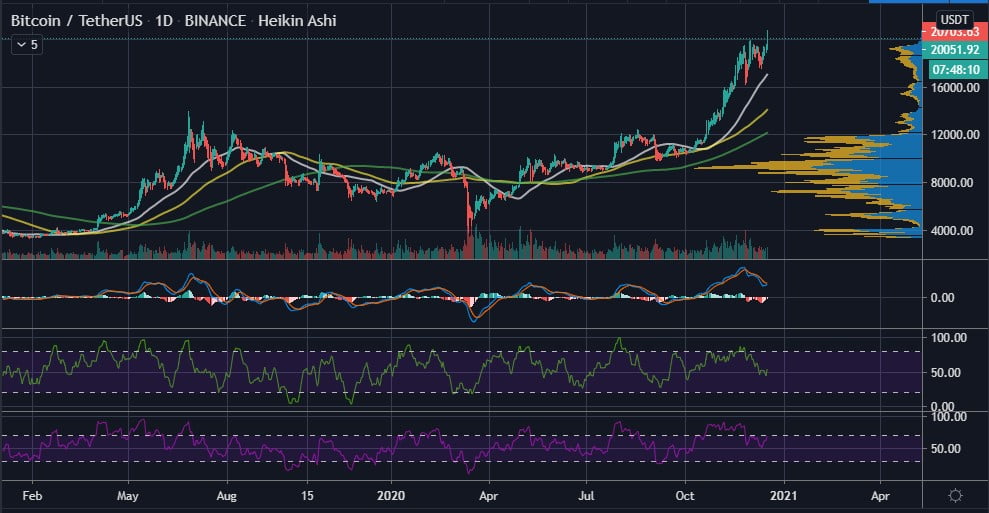 A quick glance at the daily BTC/USDT chart above reveals that Bitcoin still has some ‘juice’ left in its tanks for another push higher due to the following.

As with all analyses of Bitcoin, traders and investors are advised to use adequate stop losses when trading Bitcoin at these levels. Furthermore, tomorrow is December 17th and exactly three years since Bitcoin’s last all-time high.

Therefore, an all-time high around the same date can be treated as a coincidence or as a sign that a correction is most likely brewing and taking profits should be considered.