The amount of Bitcoin being deposited on crypto exchanges has seen a significant increment in the last week. This influx of Bitcoin into exchanges was captured by Philip Gradwell of Chainalysis who shared his observation via the following statement and accompanying chart.

#bitcoin balances of exchanges have reversed trend and increased in the last 7 days, suggesting further sell pressure. This is even when taking into account uncertainty as to whether some outflows may be internal movements to cold storage.

18k Bitcoin Deposited into Gemini Before the Dip from $60k

Yesterday, and before Bitcoin’s weekly close, the team at CryptoQuant captured an inflow of 18,969 BTC ($1.1 Billion) into Gemini. The transaction has had several mixed responses on Crypto Twitter with Glassnode labeling it as a false alert as the transaction was not captured by their system.

However, the team at CryptoQuant has stuck to their guns with the project’s CEO, Ki Young Ju, defending the alert via the following tweet.

This 18k $BTC deposit is legit as it was a transaction between user deposit wallets and Gemini hot wallet.

All Exchanges Inflow Mean is skyrocketed due to this deposit. Don't overleverage if you're in a long position.

As with all controversial on-chain data, time will tell whether the Bitcoin deposit to Gemini worth $1.1 Billion was a legitimate reason for yesterday’s dip from $60k levels to today’s low of around $53,250.

Circling back to the Chainalysis observation by Philip Gradwell, the increased deposits of Bitcoin to crypto exchanges is a legitimate reason to stay alert as there could be more selling as the week progresses.

A quick glance at the daily BTC/USDT chart below reveals that $52k is the next level of macro support if $55k fails to hold during the week. Furthermore, all the daily indicators – MACD, MFI and RSI – point towards a brief correction for Bitcoin with the 50-day moving average aligning with the $48k support zone. 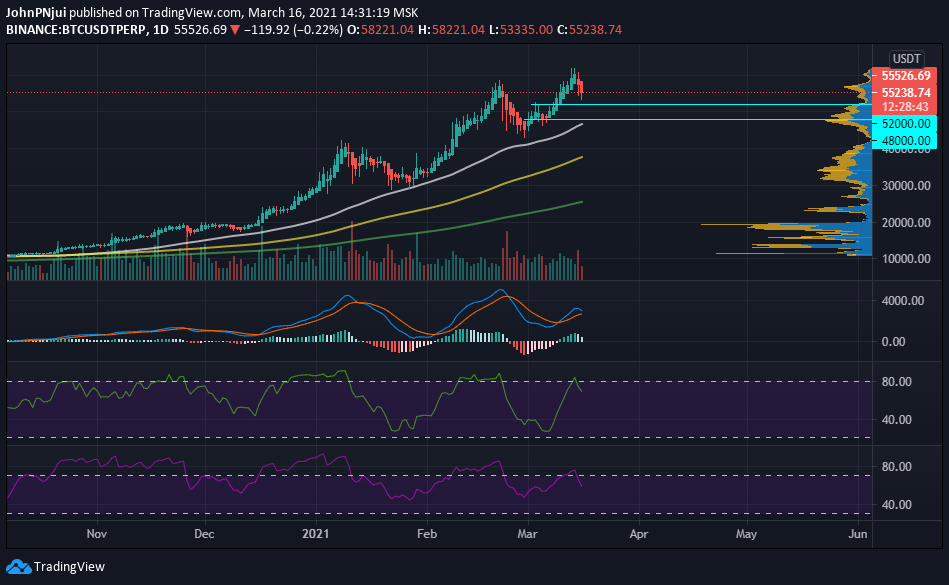