ChainLink’s (LINK) freefall from its August 16th all-time high around $20 seems to have found solid support around another previous all-time high of $8.80. According to the team at Santiment, ChainLink’s daily active addresses charted against price is indicating a bullish divergence that could lead to a relief bounce for LINK.

The team at Santiment shared their analysis via the following tweet and further indicated that the last time there was such a bullish divergence, was in early September between the 4th and 6th. During this time period, Chainlink experienced a bounce from $10.61 to $12.91 in a 24 hours period.

2) bounce from $10.61 to $12.91 in a 24-hour period, we are again seeing promising similar bullish levels of address activity compared to the expected historical mean at these price levels. Get a month of Sanbase PRO to gain access to this model with the link above! 🔝

What the LINK/USDT Chart Says

From a macro point of view – the weekly chart – Chainlink is still very much in a downtrend. The weekly MACD is about to cross in a bearish manner and its histograms indicate a continual level of selling since mid-August. Trade volume is also in the red further suggesting that the bounce predicted by the team at Santiment might just be temporary. 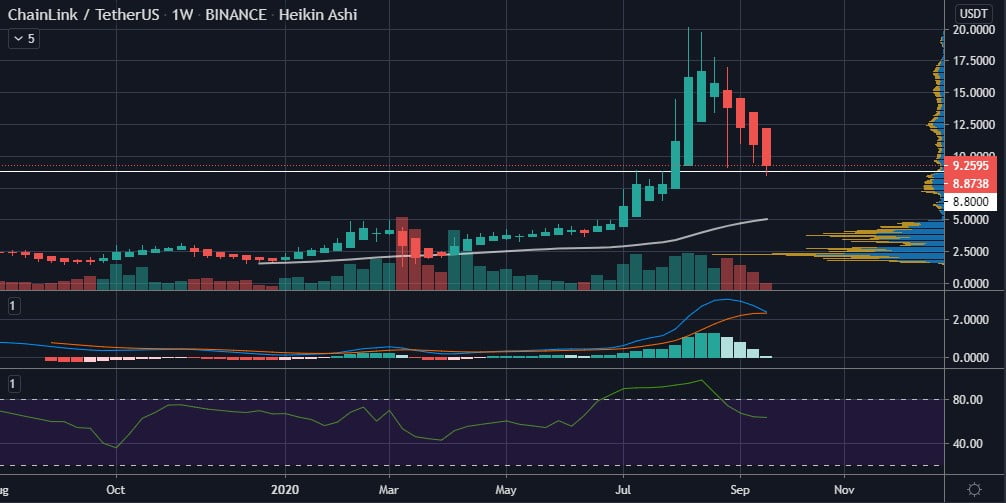 Also from the chart, it can be observed that ChainLink’s previous all-time high of $8.80 set in mid-July, is currently acting as strong support for LINK. At the time of writing, LINK is trading at the $8.88 price area with a slight possibility of the digital asset attempting to reclaim $9 or even the $10 psychological support in the days to follow.

Zeus Capital also compared ChainLink to the failing Nikola Electric Vehicle company as can be seen in the following tweet.

Too many similarities between $LINK & $NKLA. Trevor Milton stepped down as a chairman of Nikola; Steve Ellis (Chainlink's CTO) hasn't been seen for a while.
DYOR & SELL before the final dive. Believe it or not – it's coming. pic.twitter.com/sVrFwvqKuI

Summing it up, ChainLink’s daily active addresses vs price hint of a bullish divergence that could result in a temporary bounce for LINK in the crypto markets. However, on a macro level, the weekly chart indicates that ChainLink is in a clear bear trend.

This has led to the team at Zeus Capital encouraging traders to short ChainLink to as low as $4 per LINK. Furthermore, they have compared the ChainLink project to the ailing Nikola EV company.

As with all analyses of ChainLink, traders and investors are advised to do their own research, use stop losses and low leverage when trading LINK on the various derivatives platforms.