Bitcoin and Crypto analyst, Timothy Peterson, of Cane Island Alternative Advisors, has identified that the Chainlink network is growing at a rate of roughly 12% per month. When this growth is compound, it translates to roughly 300% per year. Mr. Peterson shared his analysis of the Chainlink network through the following tweets

2/ This when compounding and network effects are considered, translates into network value growing at nearly 300% per year. pic.twitter.com/EXVsUQhgeR

On numerous occasions, Mr. Peterson has pointed out that the price of LINK is related to the number of function calls on the Chainlink network. This relationship is at the core of his Metcalfe model of analyzing Chainlink which he has simplified using the following chart.

Short-term, A Pullback is Brewing for Chainlink (LINK)

From a technical analysis point of view, the daily LINK/USDT chart below hints of an almost overbought situation for Chainlink. 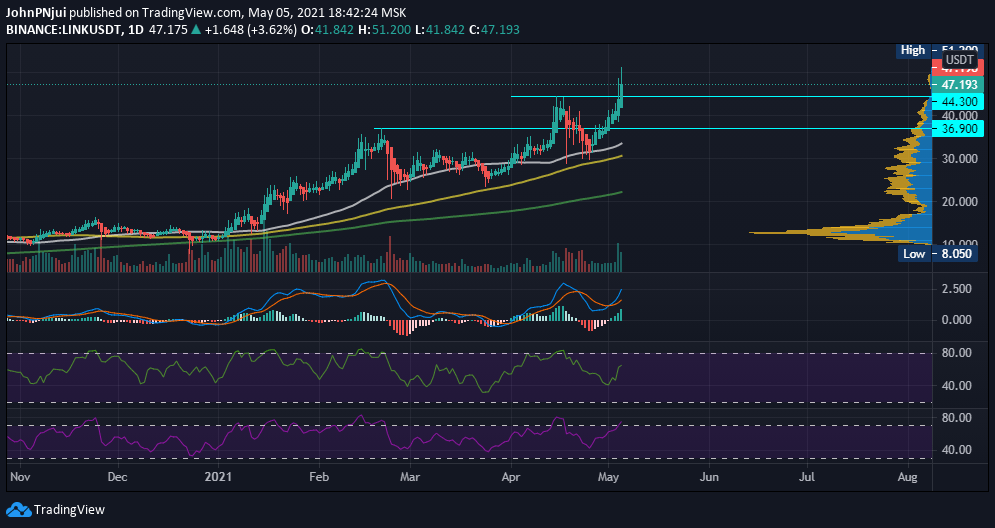 To begin with, the daily MACD is clearly in bullish territory and is yet to show signs of weakness. The daily trade volume is still in the green with the daily MFI yet to be overbought at a value of 63. However, the daily RSI has crossed into overbought territory at a value of 74. Therefore, a pullback could be brewing for Chainlink in the hours and days to follow.

In terms of macro support zones, previous all-time highs of $44.30 and $36.90 are areas of interest moving forward.