Ethereum Stares at $420 Thanks to PayPal as ETH 2.0 Gathers Steam

The news of PayPal beginning to offer crypto services to its US users is still very much being felt in the crypto markets. Taking a quick look at Bitcoin, the announcement has resulted in the King of Crypto zooming past several resistance levels to print a 2020 peak value of $13,267 set earlier today. In the case of Ethereum, the PayPal news has had a similar effect with ETH breaking the $390 and $400 resistance levels in quick succession.

Ethereum is Staring at $420 Next 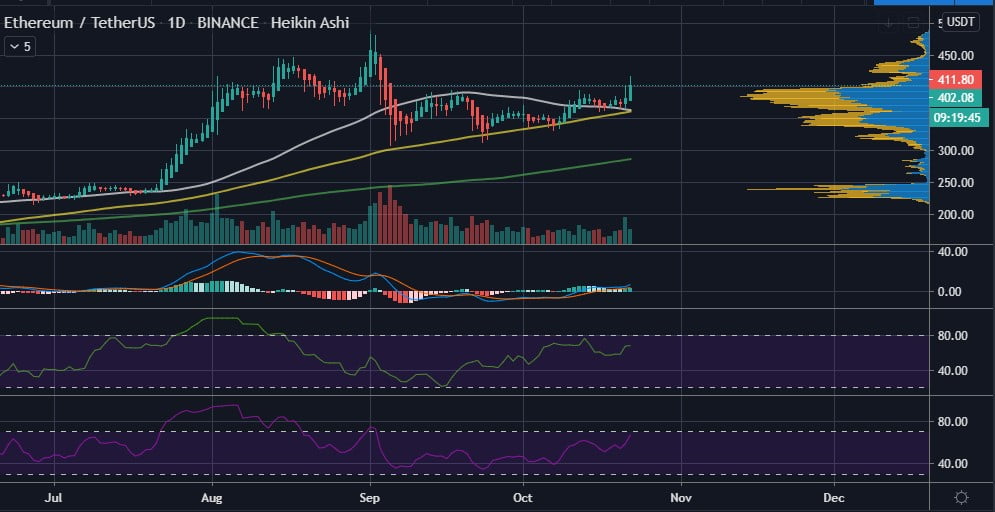 At the time of writing, Ethereum is trading at $412 and according to the daily chart above, ETH could retest $420 in the hours or days to follow. The chart is the daily ETH/USDT which also provides the following information.

The PayPal news has pretty much overshadowed the recent ETH2.0 development update by ConsenSys developer Ben Edington in which he explained that the deposit contract should be launched any time soon. He also explained that ETH2.0’s beacon chain genesis will happen within the next six to eight weeks.

Speaking of which – I am expecting news about the deposit contract any day now. Probably about 10 minutes after I publish this . Basically, as I understand it, we are good to go: deposit contract in the next few days; beacon chain genesis 6-8 weeks later. (This is not an official statement!)

Summing it up, the news of PayPal offering crypto services has provided the bullish momentum for Ethereum to break the $390 and $400 resistance levels in quick succession. As a result, Ethereum is facing a similar situation to the one observed during August’s DeFi boom that resulted in ETH printing a local top at around $488.

Additionally, ETH2.0 development continues to gather traction with the deposit address for staking expected any time soon and beacon chain genesis could be launched in the next six to eight weeks.

In terms of short term price action, Ethereum is staring at $420 and a break of this level could open the doors to $450 and even $488 once ETH2.0 development starts moving to the Ethereum mainnet.