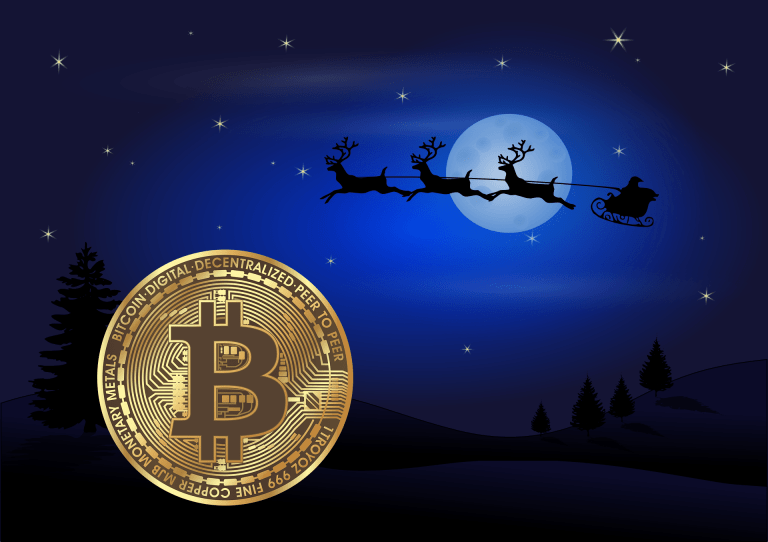 Mom’s Buying You Bitcoin For Christmas – Is It A New Bullish Trend?

When your mom says she wants to buy you some bitcoin for Christmas does it mean there could be something stirring in the crypto marketplace, in a good way?

After all, this year’s Thanksgiving bitcoin bounce has lent weight to the thesis that the holiday season can act as a price pump, assuming sentiment going into the festive season is already somewhat conducive.

The theory goes that the young evangelists in the family will start to explain what crypto is about for curious family members, a conversation that ends with the clincher – so how do I buy this sucker?

The mother of reddit user Devil_Hand spilt the beans on her bitcoin present plans when she discovered that she didn’t have the faintest idea of how to go about getting hold of the premier virtual currency.

She was forced to message her son: “I’m trying to buy bitcoin for Christmas what is a wallet????”

That’s often one of the first things a newbie will be perplexed by. How can a virtual currency have a wallet?

Her son was forgiving. “Oh bless ???I’ll talk about it later today x” came the reply.

Now we know about scanning Google Trends for a bump in searches for “buy bitcoin” as a leading indicator metric for upward price movements, but discerning what the moms of America and mums of the UK might be buying their offspring from the crypto store is a new one.

It begs a number of serious questions.

First, is this indicative of a trend? Is your mother a super-cool ‘Crypto Mom’ that thinks out of the box to buy you what you really really want, à la Spice Girls?

Who knows, but leave a comment below if you know of any cool parents who are lining up a surprise crypto surprise for Alice or Bob.

After all these years, bitcoin still not user-centric

The perhaps more serious thing to consider is what this says about the state of the industry after 10 years of trying to fix ease of use – user-unfriendliness is still a thing, a big thing.

Those on the inside looking out can get a little blase about onboarding as the infrastructure know-how can be so easily taken for granted.

It can be too easily assumed that the amount of bitcoin you have is associated with an 34 character alphanumeric string known as an address and that this address (or public key) or addresses is/are the wallet and to secure it you have another alphanumeric string of characters known as the private key, which are the substantive elements of public-key cryptography and that these addresses exist on the blockchain which is sometimes called a ledger but is in essence a decentralised database where transactions are immutably recorded. Phew.

And in the event of loss of keys, you need to recover said keys with your “seed” and if you lose the seed your bitcoin is gone forever, although you can “see it” on the blockchain.

You can appreciate that mom might be scratching her head and this point, as too would dad no doubt.

For mere mortals then, that is all adds up to one one big barrier to entry.

And despite the apparent ease-of-use of Coinbase (high fees aside), for example, or of today’s self-custody wallet applications, the industry has still not really solved ease-of-use in the way that setting up and sending email has been solved; or in the way that sending and receiving digital fiat money using say Apple Pay has made transactions almost analogous to sending a photo or text message.

As we know Facebook with its arms-length Libra Association has a plan to fix crypto’s “complexity” problem, but many would argue it’s not really crypto – and besides, governments and regulators have other ideas about what Libra can or cannot be. And anyway, who wants Facebook messing with their finances no matter how easy and cheap its crypto might be to use.

The animated discussion on Reddit has some claiming that this is precisely why bitcoin will never replace cash.

At any rate that’s what scramboney thinks:

…while others say there is no a priori reason why the ease-of-use problem cannot be solved, and once that theoretical work has been done, the practical execution will follow.

Here’s Houdinii1984‘s thoughts: “This was the exact mentality of the personal computer ending up in homes. It’ll never happen, it’s too complicated. The barrier to entry is too damn high, etc. And it’s true. Not a lot of people had IBM PCs in their homes because they cost as much as a decent used car and didn’t have a high use case for the average user. Oh, but look at us now. If you’re not connected, your an outsider nowadays.”

In the meantime Devil_Hand will have to take his mother by the hand and walk her through how to buy bitcoin, which kind of takes the joy out of receiving it.

And what’s there to unwrap come Christmas Day? Maybe mom could buy an HTC Exodus 1 blockchain-powered smartphone with its onboard hardware wallet and preload it with bitcoin?

But taking that route would require you to spend another couple of days or more explaining and demonstrating what a hardware wallet is and how to use it.

Assuming Devil_Hand onboards his mother ok, bitcoin could be presenting a nice entry point or alternatively mom could wait until nearer Christmas for a bottom – but if you are in for the long-term the timing doesn’t really matter.

Go for it moms of the world – you have nothing to lose but your wallets.