Sun Genesis mining on the Tron network was launched on the 2nd of September which is only four days ago. However, the young age of the project has not deterred TRX investors from locking up their digital assets to mine some SUN tokens. At the time of writing, over 6.5 Billion Tron (TRX) is currently locked in Sun Genesis Mining. This translates to approximately $210 Million when using a TRX exchange rate of $0.032.

Below is a screenshot from Sun.Market demonstrating this milestone. 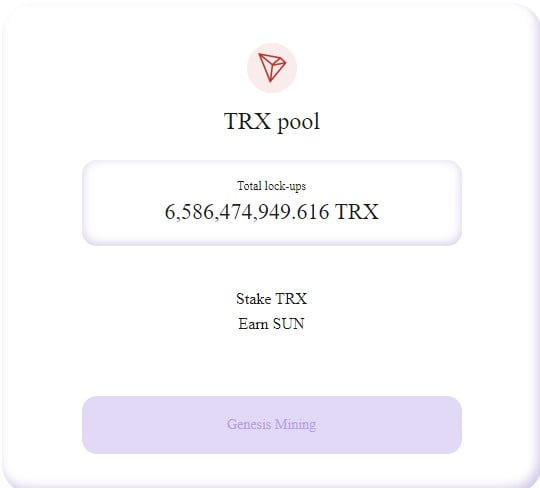 To note is that the launch of Sun Genesis helped propel the value of Tron (TRX) to a two-year high of $0.05 – Binance rate – on the 3rd of September. What soon follows was the intense crypto market sell-off that saw Bitcoin test levels below $10k on four separate occasions.

During the aforementioned period of market turmoil, Tron (TRX) managed to hold its own and dropped only to as low as $0.027. With the crypto markets once again in the green, TRX is currently trading at $0.032 and if all goes well, the digital asset could attempt a double top in the days to follow.

DeFi on the Tron Network will Continue to Grow

The Tron network is amazingly efficient when compared to Etheruem’s. This means that Tron does not have the high-fees Dapp and ETH users have to endure on the Ethereum network. According to the team at OKEX, Tron stands to benefit from an influx of dApps, developers and users wishing to avoid high Ethereum gas fees.

Due to an increase in fees and other innovations, other blockchains are looking to enter the DeFi space…Tron has made the biggest leap thus far, releasing a series of protocols and applications that mimic Ethereum DeFi. TRX is rallying as a result…

Most recently, a firm called TronFi has begun to release “yield farming” protocols such as Pearl.finance, Salmon.finance, and Carrot.finance. The Tron Foundation has also released a protocol called Sun, where users deposit TRX to mint a new coin called SUN, whose holders will govern the direction of this application. All of these protocols eerily resemble Ethereum’s Yam.finance, which popularized the latest generation of DeFi protocols.