Questions Linger on Why Anyone Would Pay $2.6M in Ethereum (ETH) Fees

Someone paid $2.6 Million in Ethereum fees for a transaction worth approximately $134. 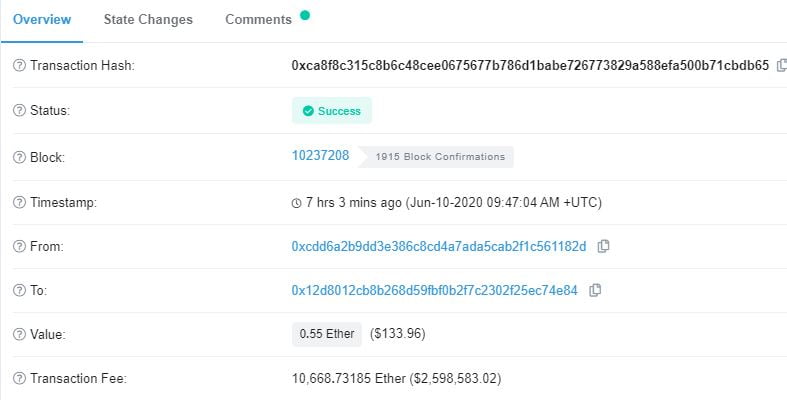 We are further investigating the incident of unusually high tx fee, and you are welcome to provide clues to [email protected] SparkPool has had the experience of handling similar issues properly. There will be a solution in the end.

The mention of experience by StarkPool is in reference to a similar event in March 2019 when an Ethereum user accidentally paid 2,100 ETH in transaction fees by confusing the fields required to send an ETH transaction. The incident was solved with StarkPool refunding 1,050 ETH.

The enormity of the mistake has caught the attention of Ethereum Co-Founder, Vitalik Buterin, who is for the opinion that the transaction was a definite mistake. His comment regarding the event was via the following tweet.

I'm expecting EIP 1559 to greatly reduce the rate of things like this happening by reducing the need for users to try to set fees manually.

Questions Still Linger on the $2.6M in Ethereum Fees

However, despite Vitalik’s comments that the transaction might have been a mistake, there is the additional possibility that the input was intentional and that the yet-to-be-identified sender, knew what s/he was doing. One plausible theory is that the transaction was what is known as a Trade-Based Money Laundering (TBML) transaction. This theory was put forth by @benjaminjwhitby.

Best To Wait for StarkPool’s Findings on the ETH Transaction

However, it might be a bit premature to jump to the latter conclusion of Money-laundering. A more prudent approach would be to wait for StarkPool to conclude its investigation on the one-of-a-kind Ethereum transaction.