Famous American actress, Lindsay Lohan, has released her first music NFT on the Tron blockchain. The NFT is up for auction on FansForever.io with Tron’s Justin Sun bidding 300,000 TRX (roughly $19,200) for the NFT as seen in the following tweet.

According to the FansForever.io auction, the music NFT is titled ‘Lullaby’ and is a collaboration between Lindsay Lohan and DJ Manuel Riva. At the time of writing, Justin Sun has been outbid by a new offer of 400,000 TRX (approximately $25,600) as seen in the screenshot below. However, the auction is still ongoing with 4 days and 14hours to go till it is over. 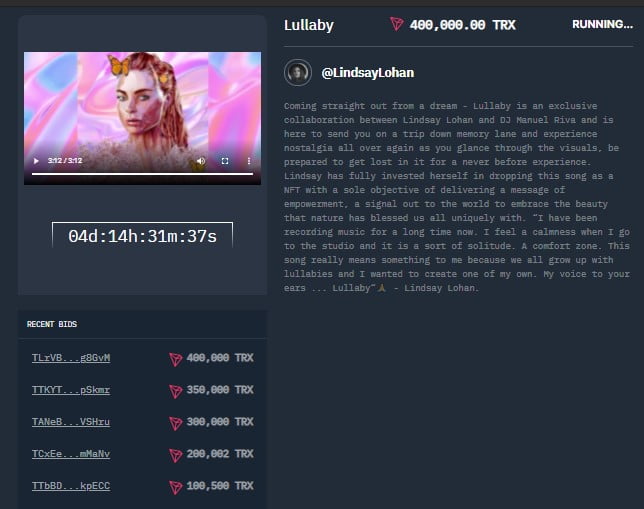 Back in late 2020, the Tron Network launched the TRC-721 standard to cater to the continually growing NFT industry. The music NFT by Lindsay Lohan is, therefore, the first of many potential, high-value NFTs that will soon have a home on the Tron network.

Also worth mentioning is that the Tron DeFi ecosystem has continued to grow at an impressive rate. At the time of writing, a total of $8.3 Billion is currently locked on the various DeFi protocols on the Tron network.

To note is that Tron (TRX) opened the year at a value of roughly $0.028 signifying a 128.5% increment to its current value and a 144.6% increment to the recent high. The tremendous growth in value of Tron (TRX) can be attributed to strides made in DeFi, NFTs and USDT Tron becoming increasingly popular due to its efficiencies when compared to the Ethereum version of Tether.