USDT on TRON Exceeds USDT on Ethereum 729 Days After Launch

The amount of Tether (USDT) issued on the Tron blockchain has just exceeded that issued on Ethereum. Tron’s founder and CEO, Justin Sun, shared the milestone through the following tweet while also noting it took 729 days to achieve it.

Moments before the milestone was reached, Justin Sun thanked the Tron (TRX) community for their continued support through the following statement.

Time to witness the historical moment. In less than 2 years, USDT on TRON outperforms Ethereum in both circulation and market cap. Thank you all for the support and trust from TRONICS. TRON, to the future.

At the time of writing, the amount of Tether on Tron currently stands at $23.994 Billion whereas that on Ethereum is at $23.416 Billion. TRC20-USDT has eclipsed ERC20-USDT by roughly $578 million and is a sign of Tron’s impressive journey since the launch of its Testnet three years ago.

At the same time, the price of Tron is in a bullish uptrend as seen through the 3-day TRX/USDT chart below. 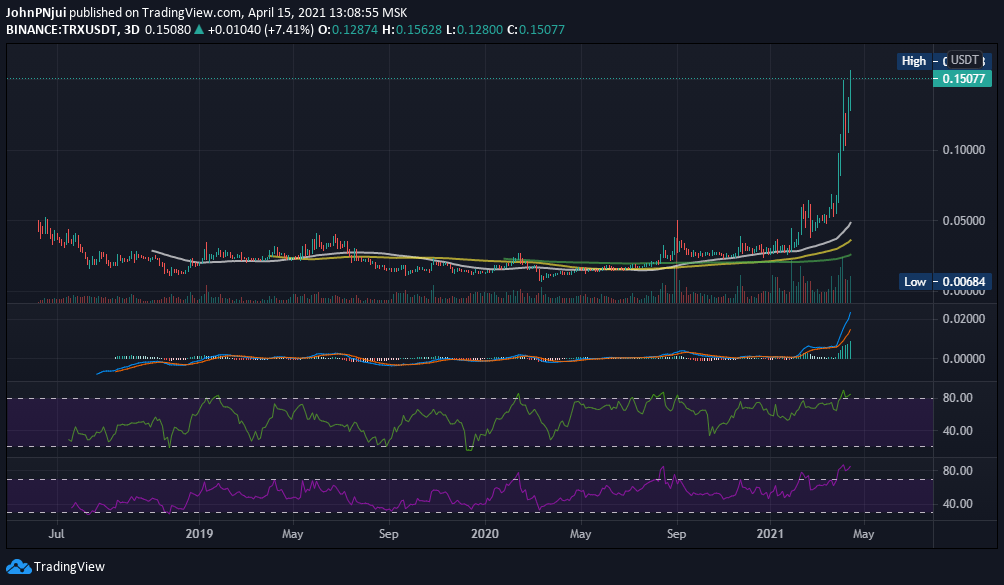 Also from the chart, it can be observed that Tron is in overbought territory on a macro level and could be due for a correction in the days to follow as shall be explained.

To begin with, the price of TRX/USDT mimics a parabolic move with the 3-day MACD confirming this. The 3-day MFI and RSI are also in overbought territory at values of 84 and 83 respectively. Secondly, the price of Tron (TRX) has deviated far from the 3 moving averages thus hinting that a correction is in the pipeline or has already begun.

With respect to short-term support zones, Tron (TRX) has the following price areas of interest.