Well, that’s something we haven’t seen since the old days, like last year: Ripple’s XRP leading the crypto market higher.

For a change, XRP is seeing its price respond positively to promising news flow and a number of indirect happening that have helped firmed its position.

XRP is making headway in the remittance market, with reports that it is seeing a jump in usage in countries such as Mexico and the Philippines, two of the largest remittance markets in the world.

The XRP breakout of sorts takes place against the background of extreme rangebound trading for bitcoin as it struggles to hold $8,000, after declining. However, it too has rebounded to an extent, from session lows at $7,900.

XRP’s three-day rally may have legs

XRP is 10% higher in the past three days as its rally continues at $0.278 on regulated US exchange Kraken.

Bulls will note that the relative strength index is at 57, with a reading above 60 indicating overbought territory.

The price is back trading above the 50-day moving average. The last time it did that was on 17 September, with the price topping out at $0.327 before crashing back down to as low as $0.20 on the intraday.

It could be a different story on the technical side this time, with the volume profile indicating strong resistance not kicking in until $0.399 where selling pressure would be likely to return in spades.

However, most bulls will be thankful if the price can get back into the $0.30s, which means consolidating the gains of the past few days first. 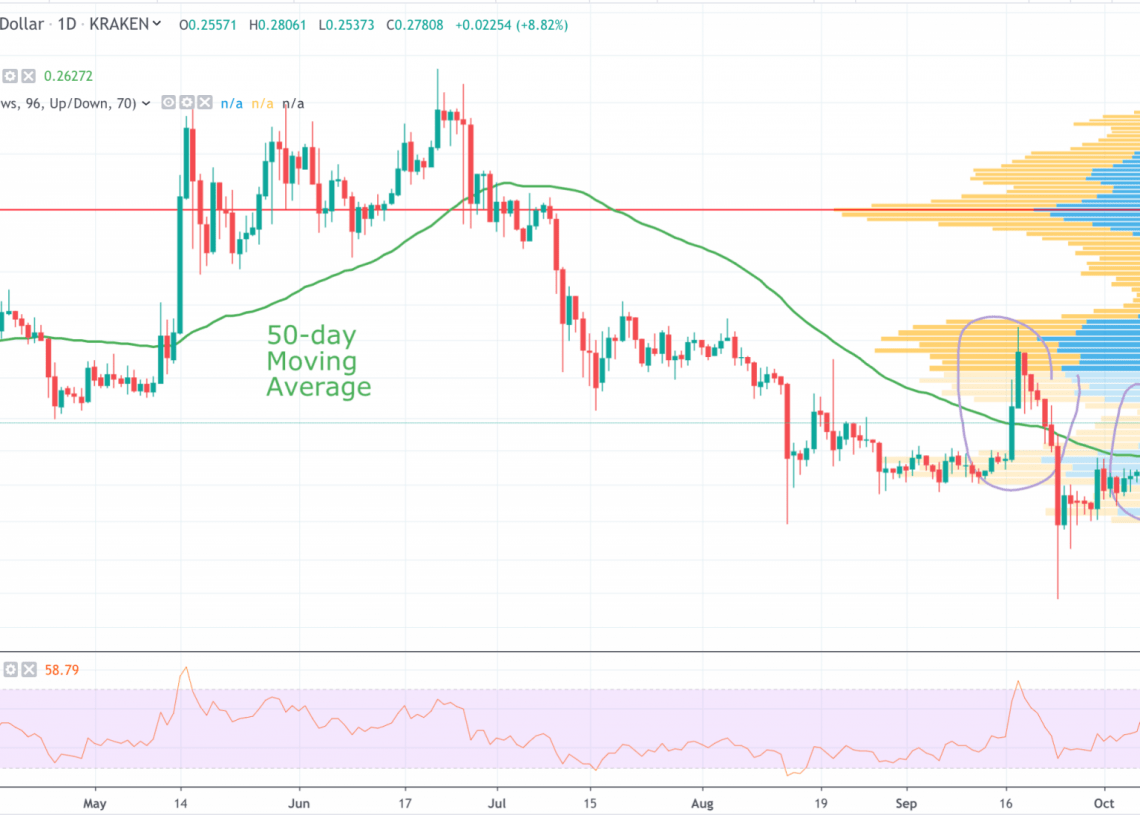 Moneygram tie-up showing its worth to Ripple

Ripple’s new-found adoption traction is largely thanks to its strategic partnership with Moneygram, which saw the crypto company buy a stake in the ailing money transfer firm.

Moneygram’s had seen its share price take a hammering earlier this year.

Moneygram was trading at a year to date low of $1.39 at the end of May. Then Ripple invested $30 million at $4.10 a share with the option of buying a further $20 million.

That deal news set off a bull run for Moneygram shares as its shares rose to above $6 and are currently trading at $4.20.

Ripple’s xRapid service is the product that uses the settlement token; it has seen an 80% surge in its payment channels transaction volumes as evidenced in movements between Bitstamp exchange and coins.ph and also from Bitstamp and the Mexican-based exchange Bitso.

“The week is not yet over, and we are already at a new high in ODL [on-demand volume] traffic between Bitstamp to Bitso and Bitstamp to CoinsPh,” commented Twitter user @hmatejx.

The week is not yet over, and we are already at a new high in ODL traffic between Bitstamp to Bitso and Bitstamp to CoinsPh. pic.twitter.com/B60EaplPF7

Ripple is also holding its Swell conference in Asia next month, as it doubles down on its Asia focus.

In something of a coup for Ripple, the former governor of the Reserve Bank of India, Dr. Raghuram Rajan, features among the keynote speakers.

But another factor that may be coming into play is the $24 million Block.one fine being paid in the firm’s settlement with the US Securities and Exchange Commission (SEC) over the charge that it was involved in promoting an unregistered securities sale in the EOS initial coin offering. But to be frank, that is peanuts compared to the $4 billion raised in the EOS ICO.

As Ripple followers will be aware, a similar SEC cloud has been hanging over Ripple, with the SEC on record as being in the throes of determining whether Ripple’s issuance of XRP is in effect promoting an unregistered security.

If the fine is of a similar order of magnitude and an amicable settlement is reached, then that would be good news for both Ripple the company and its XRP token.

Another factor helping settlement token XRP’s buoyancy is the travails of Libra.

The departure of PayPal is a severe blow to the stablecoin project and could even threaten Facebook’s push into remittances as it attempts to corral the unbanked of the Global South – that is probably good news for Ripple, although chief executive Brad Garlinghouse has previously insisted that Libra was not a threat to its business.

Garlinghouse has spoken to Anthony Pompliano of Morgan Creek Digital for his OffTheChain podcast show, which comes out tomorrow (Tuesday 8 October), and it should make for interesting listening as he apparently tackles some “hard questions” and did not hold back as he “responded to detractors”, according to Pomliano.

Gary McFarlane
Gary is a cryptocurrency analyst at interactive investor, the UK’s second-largest stockbroker. He has been writing professionally about cryptocurrency since 2013, when he initiated bitcoin coverage at Money Observer, one of the UK’s most respected investment magazines. Gary writes for EWN in a personal capacity and his contributions should not be taken as investment advice.