XRP Interest on Social Media at its Highest Since September 2018

Social media interest related to XRP is at its highest since September 2018. This is according to on-chain data by the team at Santiment who pointed out that XRP’s social volume metrics were at their highest since 21st September 2018. At the latter date, XRP surged from $0.32 to $0.77 in a day. The team at Santiment shared their observation via the following statement and accompanying chart. 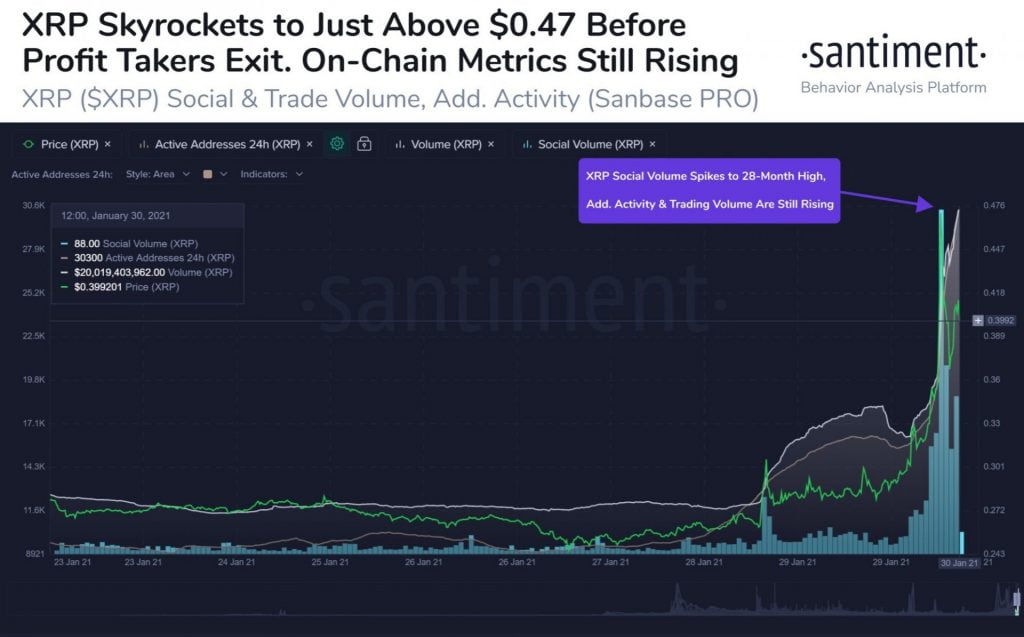 XRP Thrives Due to the WallStreetBets Crypto Community (SatoshiStreetBets)

The increased interest in XRP has also resulted in a significant increment in new account activations. According to XRPScan.com, 7,618 new XRP accounts were created yesterday, January 30th. Such a high number of new account activations is reminiscent of the excitement surrounding the Flare Networks snapshot back in mid-December.

Below is a screenshot demonstrating the mentioned increment in XRP new account activations.

XRP Could Keep Rising in Value

Before the WallStreetBets crypto community took XRP to the local high of $0.52 on the 30th of this month, the remittance coin was consolidating around the $0.25 price area on the 28th of January. Doing the math between the two values, XRP increased by 108% in a period of 48 hours.

At the time of writing, XRP is trading at $0.48 and looks primed to attempt to break the $0.52 resistance are in the hours or days to follow.

However, as was witnessed with the Dogecoin pump by the same WallStreetBets community, XRP traders and investors are reminded that such parabolic moves end with a massive correction. In the case of DOGE, the meme coin experience a massive 70% dip after the impressive pump t0 $0.087 levels.

Therefore, it might be prudent to use adequate stop losses and low leverage when trading XRP on the various derivatives platforms.