Furthermore, Zilswap’s current total value lock would exceed that of 1inch Exchange if it were compared alongside Ethereum DEXs. Mr. Kummer shared his analysis of ZilSwap through the following tweet and screenshot demonstrating ZilSwap’s impressive growth when compared to popular Ethereum based decentralized exchanges.

. @ZilSwap's TVL is at USD 219 million. With this, it has surpassed 1inch and is ranked number 6 in this list. Next stop Bancor. $ZIL pic.twitter.com/vpxaVkSywN

A Brief History of ZilSwap

ZilSwap is Zilliqa’s very own decentralized exchange for ZRC-2 tokens. ZilSwap uses Autonomous Market Makers for its trading functions and also allows holders of ZRC-2 tokens and ZIL to contribute to the various liquidity pools. Liquidity providers are thus rewarded through the trading fee on each swap.

The latter value is a few cents away from the all-time high value of $0.2315 set on May 10th, 2018, as documented by Coinmarketcap.com. According to the tracking website, Zilliqa (ZIL) is now ranked 53rd as seen in the screenshot below and only 3 spots from reentering the top 50 once again.

Zilliqa (ZIL) Could Set a New All-time High in Q2

As earlier mentioned, Zilliqa’s recent high of $0.215 is very close to the May 2018 all-time high value of $0.2315. A brief look at the daily ZIL/USDT chart reveals that Zillqa could retest or eclipse this price area in the days to follow. 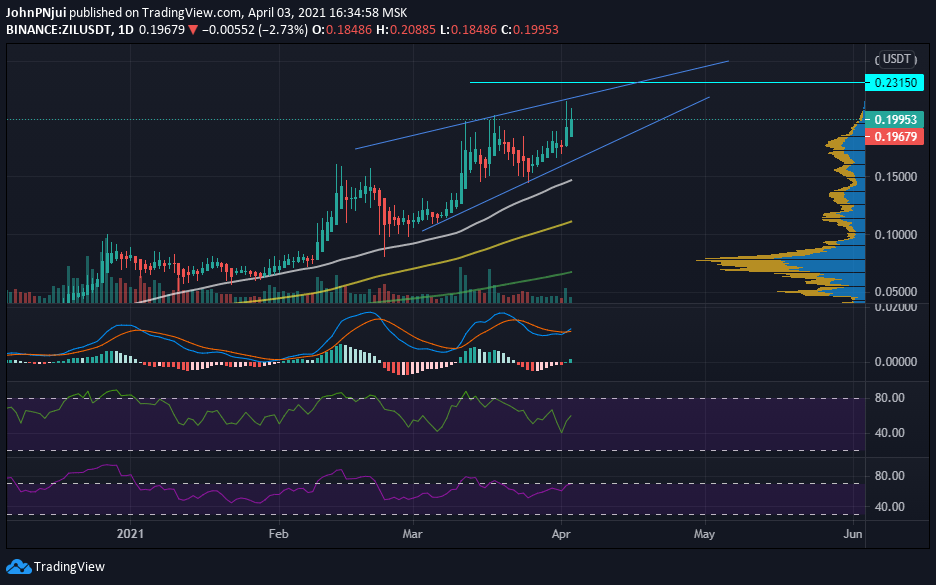 From the ZIL/USDT chart above, the following can also be observed: