MicroStrategy May Increase or Sell its Bitcoin Holdings in the Future

MicroStrategy has released its Q1 2021 financial report in which the company states that it now owns 91,579 Bitcoins at an average cost of $24,214 for each BTC.

The company’s CEO, Michael Saylor, went on to explain that the first-quarter results were an indicator that their two-pronged approach to regular business and owning Bitcoin was working. Mr. Saylor elaborated the company’s progress through the following statement.

MicroStrategy’s first quarter results were a clear example that our two-pronged corporate strategy to grow our enterprise analytics software business and acquire and hold bitcoin is generating substantial shareholder value.

We had one of our strongest operational quarters in our software business in years…We continue to be pleased with our bitcoin strategy.

MicroStrategy May Increase or Reduce its BTC Holdings

In the report, Mr. Saylor reiterated that MicroStrategy ‘will continue to acquire and hold additional bitcoin as we seek to create additional value for shareholders’.

However, the report goes on to clarify that the company of MicroStrategy might increase or sell its Bitcoin holdings in the future as seen through the following statement.

To note is that MicroStrategy’s CEO, Michael Saylor, is a firm believer that Bitcoin is a greater store of value than Gold.

However, the recent news of Tesla selling $272 million in Bitcoin, might have motivated MicroStrategy to add a statement that selling BTC was a possibility in the future.

The move by Tesla to offload some of its Bitcoins led to an uproar on the various social media platforms with some members of crypto-Twitter concluding that Elon Musk dumped his bags on them. Below is a screenshot of one such reaction by Dave Portnoy and Elon Musk’s response. 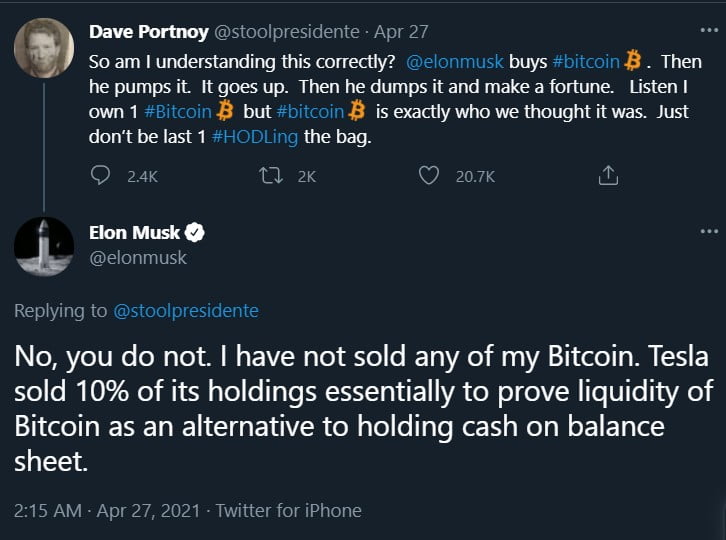 From the example of Tesla, it can be concluded that MicroStrategy made a wise move in declaring that selling some of its Bitcoin was a possibility in the future. Besides, MicroStrategy, like every other global company, is tasked with first staying true to its shareholders.