On the 3rd and 4th of February this week, Microstrategy held their annual user conference which included the ‘Bitcoin for Corporations’ program spearheaded by the company’s CEO, Michael Saylor. According to Mr. Saylor, the Bitcoin program attracted 8,197 attendees from 6,917 different enterprises. Mr. Saylor shared the statistics of the event via the following statement.

Our @MicroStrategy World 2021 was a great success, with 22,031 registrants. The #Bitcoin for Corporations program attracted 8,197 attendees from 6,917 different enterprises. All sessions are free & uploaded here, along with our Bitcoin Corporate Playbook.

As mentioned by Mr. Saylor, all sessions are free including Microstrategy’s Bitcoin corporate playbook that can be accessed via this link.

Amongst the attendees was SpaceX as highlighted by the team at @DocumentingBTC via the following tweet. Attendance by the space exploration company confirms that Elon Musk is indeed interested in adding Bitcoin to its treasuries.

Also this week, Mr. Saylor shared an estimate made by Ross Stevens in which he forecasted that his firm – NYDIG – will manage $25 Billion in Bitcoin by the end of the year. Mr. Steven’s comments can be found below.

A year ago we had 25 institutional clients… today 280. By the end of year, I’m confident we’ll have over $25 billion of #Bitcoin. I’ve just got this order book, I’m not guessing, I see what’s happening.

This estimate might be a conservative one given that private and publicly traded companies now own 1,265,460 BTC according to BitcoinTreasuries.org. This translates to roughly $49.859 Billion using Bitcoin’s current value of $39,400. Chances are, that more companies will want in on the action.

At the core of the Bitcoin accumulation are the two companies of Microstrategy and Grayscale who now hold 71,079 BTC and 649,130 BTC respectively.

Microstrategy Has Prospered Since Being Downgraded by CitiGroup

To note is that CitiGroup downgraded Microstrategy to a ‘sell’ rating on the 8th of December last year as a result of the company offering $400 million of convertible senior notes to purchase more Bitcoin. However, MicroStrategy’s stock performance has continued on an upward trajectory despite the ‘negative’ feedback by CitiGroup.

This fact has been highlighted by the team at Ecoinometrics via the following statement and chart.

Since the start of its #Bitcoin treasury program: 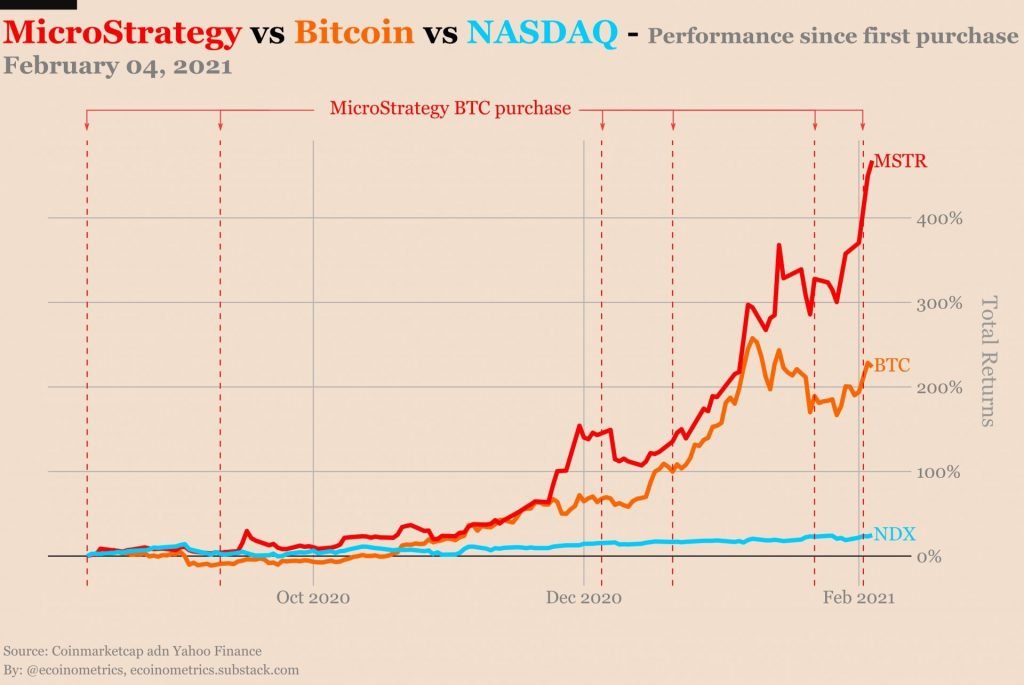