Chainlink’s Network Growth at its Lowest Since October 2020 – Report

Activity on the Chainlink (LINK) network is slowing down. This is according to a report by the team at Santiment who pointed out that Chainlink’s network growth was at its lowest since October 2020. Furthermore, fewer and fewer LINK addresses were interacting with the Chainlink network as highlighted in the following chart.

A Drop in Network Growth is Bearish for Chainlink

Unlike in October 2020 when the drop in network growth formed a bullish divergence with the price of Chainlink, the ongoing decline in activity could be bearish given that the price of LINK is also dropping. To further elaborate this point, the team at Santiment compared LINK’s active addresses in the last three months and found a significant drop as explained below.

LINK has dropped significantly in terms of average active addresses compared to spring. Just around 5K addresses daily are active on the network nowadays. From 13K in April.

Exchange Inflows of Chainlink Spiked in the Last Week

The bearishness surrounding Chainlink has also led to an increased transfer of LINK into exchanges for possible selling as highlighted in the chart below. 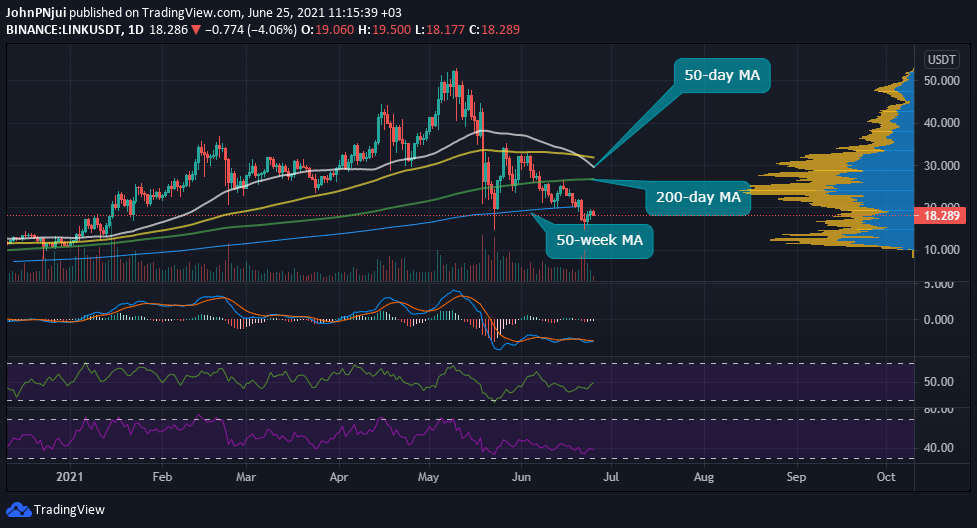 Also from the chart, it can be observed that a death cross between the 50-day MA and 200-day MA is in the process of forming. Therefore, Chainlink could be in for a rough few weeks in the crypto markets.