The digital asset of XRP has had a positive 2021 in terms of returns. This is despite the ongoing lawsuit by the SEC against Ripple that saw XRP drop to a low of $0.17351 on the 29th of December. The remittance coin went on to open 2021 at a value of $0.23. Despite all the uncertainty regarding the SEC lawsuit, XRP is still a top 10 digital asset on Coinmarketcap coming in at number 7 as seen in the screenshot below.

Since the year began, XRP has gone on to post a high of $0.755 as a result of the crypto wing of the Wall Street Bets community – Satoshi Street Bets – buying and shilling the coin on social media. At the time of writing, XRP is trading at $0.617 signifying a 168% increment in value since the beginning of the year.

A quick glance at the daily XRP/USDT chart below, reveals that the remittance coin currently has enough momentum to possibly retest $0.65 in the short term with a push to $0.68 possible in Q2 of 2021. 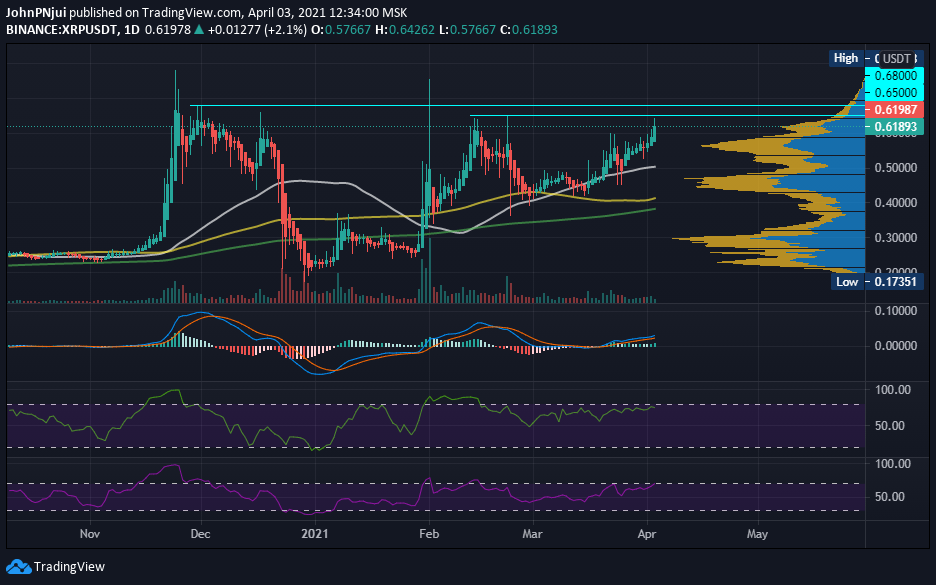 Also from the chart, it can be observed that the daily trade volume is in the green with the daily MACD yet to hint of exhaustion in the short term. The daily MFI and RSI are yet to indicate complete exhaustion at values of 70 and 73 respectively.

However, a drop in daily new accounts in the month of April could be the first sign of weakness for the remittance coin. According to data from XRPScan.com, 1,112 new accounts were created today, April 3rd. This is a considerable drop from February highs of 12,631 as seen in the screenshot below.

In conclusion, the remittance coin of XRP has continued to thrive despite the ongoing SEC lawsuit against Ripple. XRP investors continue to trade the digital asset on crypto platforms outside the jurisdiction of the SEC. However, a drop in new daily accounts should be a cause of concern as the value of digital assets is usually derived from network activity. Therefore, a drop in new daily accounts could hint at a possible dip in the markets for XRP.